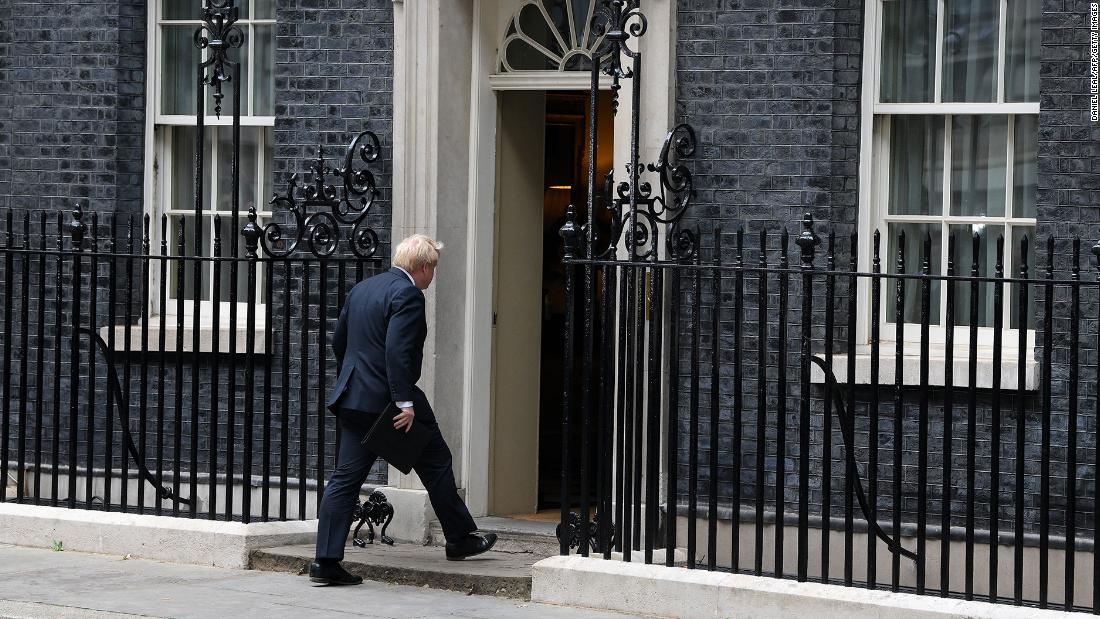 But its popularity outside parliament has also been badly affected by rising inflation and stagnation in the UK economy, a cost of living crisis that threatens to impoverish millions more this winter, and the risk of a damaging trade war with the European Union.

British equities rose in response to reports that Johnson was preparing to resign, and the pound gained 0.75% to trade at $1.20 – recovering slightly from its two-year low reached earlier this week.

“Make no mistake though, the [pound] remains seriously weak due to the deplorable state of the UK economy, which is underperforming, [and] likely to fall into a recession,” Walid Koudmani, chief market analyst at broker XTB, wrote in a note to clients.

The UK has the highest inflation rate in the G7…

Every major economy has suffered from the lingering effects of the pandemic on supply chains and the energy and food cost shock caused by Russia’s invasion of Ukraine in February.

But the UK has it worse than most of its peers. Inflation hit a 40-year high of 9.1% in May, the highest of the G7’s leading economies – and is expected to top 11% later this year, despite a series of rate hikes.
The knock-on effects of Brexit – Johnson’s hallmark achievement in government – ​​have exacerbated crippling labor shortages and increased operating costs for companies. Import costs have also risen due to a sharp fall in the value of the pound this year.
The rise in food and fuel prices has led to the worst cost of living crisis in decades, forcing lower-income households to choose between ‘heating and eating’, a rallying cry for anti-poverty campaigns demanding more government support.

Johnson’s government pledged £400 ($502) in grants per family to help the millions of people struggling to pay their energy bills. It also bowed to pressure last month, unveiling a £5 billion ($6.3 billion) tax on the unexpected profits of oil and gas companies.

But those efforts are being swallowed up. According to the Bank of England, disposable incomes are on track for the second largest decline since records began in 1964, driven by rising energy and food costs. And those bills are about to get much worse.

Annual average household energy bills could rise by about 50% to £3,000 ($3,600) this winter when a cap on the maximum price suppliers can charge is revised in the fall. The regulator already raised the ceiling by no less than 54% in April.

British households in particular are exposed to a continuing decline in living standards. Typical wages today are no higher than they were before the 2008 financial crisis, the Resolution Foundation said Monday.

“Britain’s poor recent record in living standards – specifically the complete collapse in income growth for poor households over the past 20 years – must be reversed in the next decade,” said Adam Corlett, chief economist at the foundation.

And heading for the lowest growth…

Without stronger growth, that wage cut will not be reversed. And there is little prospect of that in the short term. All over the world, once-robust recoveries are being dragged down. But the UK is in a particularly bad position, with a recession looming.

The world’s fifth largest economy stalled in February and started contracting in March. The decline accelerated in April, when GDP is estimated to have fallen by 0.3%, with all three major sectors of the economy – services, manufacturing and construction – declining, according to the Office for National Statistics. Retail sales fell for the second month in a row in May.

There is more bad news ahead. In a financial stability report published earlier this week, the Bank of England said the outlook for the UK economy had “deteriorated significantly”.

The Paris-based Organization for Economic Co-operation and Development forecast last month that the UK economy is headed for stagnation, with zero GDP growth by 2023. That would be the G7’s worst performance next year.

Weak growth is bad news for government debt, which has risen to over 90% of GDP as a result of measures taken to help businesses and households cope with the pandemic and the energy crisis.

Add to that the pressures of an aging population and UK public debt is on “an unsustainable path, projected to exceed 250% of GDP in the long run,” said the government’s fiscal watchdog – the Office for Budget Responsibility (OBR). ) – Friday.

That means there is little room for the next prime minister to make major tax cuts or pledges.

“All of this makes for a challenging outlook for these and future governments in steering the UK economy and public finances in the coming years,” the OBR added.

…while Brexit has not delivered

Johnson succeeded where his predecessor, Theresa May, failed by “getting Brexit done”. But the break with the European Union has not given trade the boost he and other Brexit proponents promised.

The United Kingdom has missed much of the recovery in world trade since the pandemic, the OBR concluded in March.

For many companies, the tariff-free trade deal that Johnson signed with EU leaders less than two years ago has led to a huge increase in customs paperwork, making it more difficult for them to sell in their largest export market and raising import costs. And deals made with other countries barely move the needle.

“While additional trade with other provinces could offset some of the decline in trade with the EU, none of the agreements reached so far are of sufficient magnitude to have a material impact on our forecast,” the OBR said. .

Official data published last week showed that the UK’s balance of payments deficit rose to 8.3% of GDP in the first quarter of 2022, meaning the country must increasingly rely on foreign investment to make up for its high imports. to make. more than it exports.

Against that backdrop, the pound has been under a lot of pressure this year, not helped by Johnson’s threat to tear up part of the Brexit treaty he signed. That has poisoned relations with EU leaders and led to retaliation that could escalate into a trade war likely to hurt the UK the most.

“Judging by Johnson’s early lineup of potential successors, the balance of potential outcomes would tip towards less tense relations with the EU,” Berenberg’s Kallum Pickering noted.

“Even the ardent Brexiteer candidates…are less of the populist variety than Johnson. This suggests that while it is unclear whether relations between the UK and the EU will improve a little or a lot, the overall situation will be much calmer .”