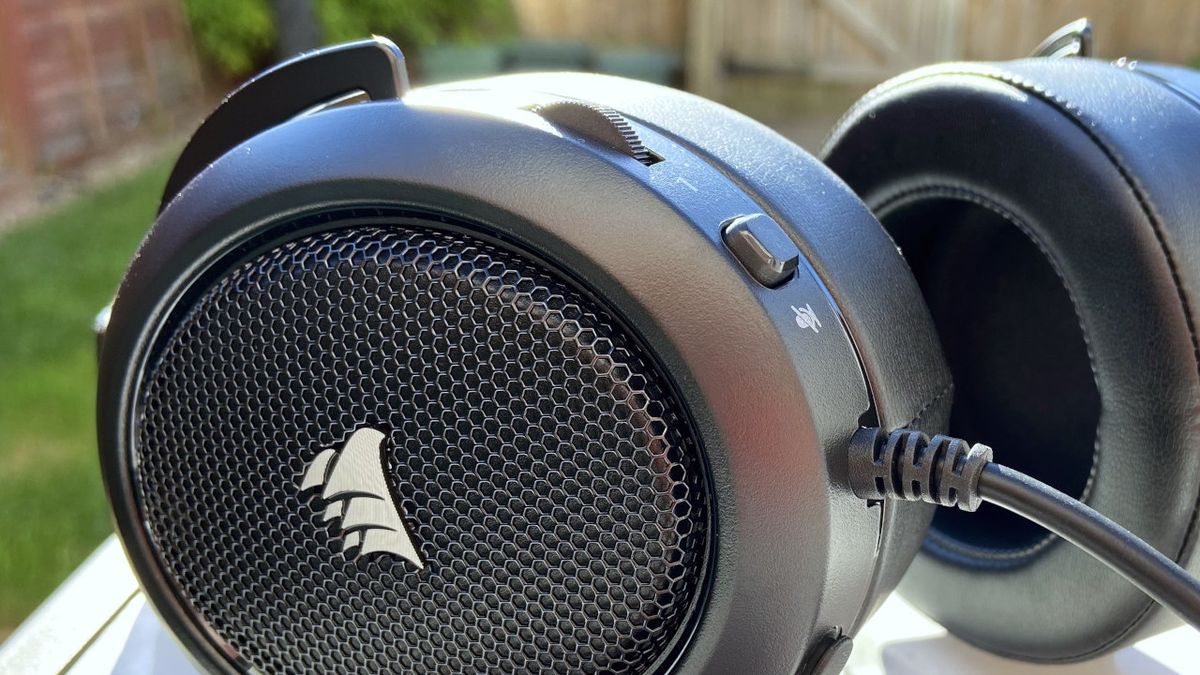 Headsets are essential accessories for gamers who team up with friends or immerse themselves in a personalized audio environment for late-night gaming. Hundreds of models, from money-saving budget variants to high-end sets for those with money to burn, are usually advertised with a lot of hype.

Not everyone has the money or patience to determine which headsets offer the best value. Luckily, we take a look at Corsair’s latest affordable entry to see if you can pick up a premium headset for under $50 in our HS50 Pro Stereo Gaming Headset Review.

Corsair sells the HS50 Pro Stereo Gaming headset through third-party retailers, including Amazon, Best Buy and Walmart, for a $50 MSRP. This wired headset is compatible with PC, consoles and mobile, using a standard 3.5mm – connection. The box contains a two-way headphone/microphone splitter in addition to the detachable microphone and a foam pop screen.

Corsair HS50 Pro: what is good

When I first took out the HS50 Pro headset, the faux leather padding along the bottom of the headband immediately caught my eye. It’s something I noticed in Corsair’s promotional footage and wondered if it would turn out to be as plush as it looks in real life. Although the thickness runs to the edges, the band is extremely comfortable and visually more appealing than regular felt or plastic-covered sponge.

The ear cups are of similar construction and equally impressive, covering its memory foam with the same artificial leather around the edges. So far, the HS50 Pro reminds me of some favorite headsets from the past; Absolute Gold Mine finds the quality you would expect relative to this price you would expect. I had no complaints about comfort after an entire night of playing Overwatch 2, and I’d have no problem picking them up as budget for my Xbox.

Each thick foam cup creates a decent seal and does a fantastic job of preventing sound from leaking. You should be able to turn up the volume without disturbing anyone else at home, as long as you don’t mind turning your ears on, as things can get sweaty quickly in the warmer months. Levels are somewhat flat, but there’s plenty of bass to enjoy games with intense music.

Each side of the headset extends about 24mm, which is plenty of extra room for my giant skull. There are also printed measurements in the band, which helps when you find the perfect size for your head. The outer sides have a fairly standard grill pattern, but with some extra chic green or blue stitching if you include one of the colored variations. There’s no RGB, but the centered Corsair logo is at least engraved in aluminum and looks smooth enough.

You can control the volume with a wheel on the left speaker, and the microphone detaches from the custom slot quickly enough. A foam mount in the box acts like a pop screen when speaking, plus a 3.5mm splitter cable helps when used on a PC sound card. Finally, a fat push button allows for a quick mute, so you can leave the mic permanently connected if you prefer.

Listen to the sound clip above and you’ll hear that the mic isn’t particularly studio quality, but it’s perfectly usable for party chat. I’ve included the monsters in the Xbox messaging system to show how it performs in real-world testing, and I’ve certainly heard worse than this.

The advertised noise cancellation is clearly in effect and you can hear a significant amount of bass being removed from my voice. It is especially noticeable at the beginning of sentences, but the clarity is mainly preserved. Sticking to in-game communication and casual chatter will be fine, so Corsair’s application for discord certification was justified. Remember that Discord support for Xbox is gradually making its way to all users, so the HS50 Pro is perfect for both console and PC.

There aren’t many negatives for such an affordable headset, but some of the missing features are probably due to cost savings. Something that is missing compared to other models is the absence of a speech-specific volume wheel, forcing you to use the Xbox side menu to adjust the party chat or the Windows volume mixer on PC instead. It may seem trivial, but when playing with a large group for extended periods of time, dedicated volume wheels are something you wish were present here.

While the microphone is detachable, the headphone cable is not. You can split it into two parts with the included adapter, but the primary cord remains permanently attached to the HS50 Pro. It’s not a complete deal breaker, but it can make for cluttered storage. Corsair includes a rubber cord, which helps pack things in when you’re not using the headset, but the cord reaches about 70 inches, so it’s still a bit bulky.

The mic mute button has a shallow travel distance and it’s sometimes hard to tell if you pushed it. Since there are no LED lights on this headset, you should learn how it feels when the mute function is activated. Overall, Corsair has made the right sacrifices for the affordable design of the HS50 Pro, in my opinion. They help keep costs down, but are worth considering if you’re frustrated with these omissions.

Finding a quality headset in this budget category is tricky and Corsair has proven the HS50 Pro to be a worthy competitor. Few models can match its comfort and style, but there are some notable wired headsets in its price range, including the Fantastic Astro A10 (Gen 2), which retails for just $10 more. Going ahead with microphone quality and just about matching the overall comfort, the Astro sometimes suffers from interference with its detachable 3.5mm cable.

Razer’s Kaira X hits the same figure and retails for $60 and matches the 50mm drivers found on the HS50 Pro. There’s still no dedicated speech volume control wheel, but you get the addition of RGB lighting, just like you’d expect from a Razer product. Fitting more of a typical gamer aesthetic with varied color schemes and adding a detachable microphone makes it a tempting alternative.

The Steeleries Arctis 1 has a wired variant, selling as cheap as $25 at past Amazon Prime Day events. The 40mm drivers are slightly weaker, but the microphone is still detachable and offers a similar level of comfort. Similar sales aren’t too far fetched for Corsair, with the HS50 Pro dropping to $27 in June 2022, so it’s worth the extra few bucks if that happens again.

Corsair HS50 Pro: Should You Buy?

You should buy this if…

You shouldn’t buy this if…

Corsair delivers a level of comfort that feels like a total steal for $50, especially considering they paired the HS50 Pro with a handy detachable microphone. Microphone quality is outperformed by the speakers, but still good enough for party chat during extended evenings of multiplayer gaming. It sits pretty next to not only the best Xbox gaming headsets under $100, but as one of the most comfortable entry-level sets around $50.

If you like using a wired headset to your wireless controller or directly to a PC, there aren’t many alternatives that can compete with the muted faux leather here. As long as you’re comfortable with the material and don’t mind getting your ears a little warm in the closed cups, it’s one of the best budget headsets I’ve used.

Corsair offers one of the most comfortable gaming headsets for $50 and dominates the entry-level category. Learn for these affordable tins and enjoy extended gaming sessions.