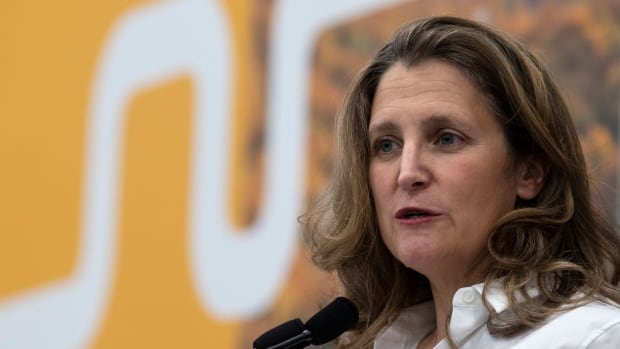 Treasury Secretary Chrystia Freeland warned on Monday that Canadians can expect an economic slowdown in the coming months.

Speaking to business leaders at a local company in Gatineau, Que., Freeland said that even if inflation starts to subside, the road ahead will be difficult.

“It is important, as Deputy Prime Minister and Minister of Finance, that I tell the people the truth about what lies ahead,” she said in French.

“Our economy will slow down as the central bank needs to tackle inflation.”

VIEW | Freeland says she will not “cover up” the economic difficulties Canadians face:

While warning of an impending recession, Treasury Secretary Chrystia Freeland says the federal government has the tools in place to successfully navigate this period.

While Freeland hasn’t used the word recession, most consumers and businesses think Canada will introduce one, according to new surveys from the Bank of Canada.

Surveys on business and consumer expectations for the third quarter published on Monday show that more than half of consumers surveyed believe there is at least a 50 percent chance of a recession. And nearly half of consumers say they buy less and buy more items on sale to meet the cost of living.

Addressing reporters after her speech on Monday, Freeland said the coming months will be a “challenging economic time”.

“I’m not going to condone it, and I’m not going to argue that we don’t have challenges ahead of us,” she said, adding that rising interest rates will have an impact if the Bank of Canada tries to curb inflation.

Annual inflation stood at seven percent in August, the most recent figure available. Statistics Canada will release its latest inflation figures on Wednesday.

Freeland suggested that all countries will be hit by the same economic downturn.

The International Monetary Fund (IMF) last week lowered its outlook for the global economy for 2023, warning that next year “will feel like a recession to many,” thanks to responses from central banks around the world.

The IMF said the slowdown is being caused by Russia’s war in Ukraine, chronic inflationary pressures, high interest rates and the ongoing fallout from the global pandemic.

“The worst is yet to come,” said IMF chief economist Pierre-Olivier Gourinchas.