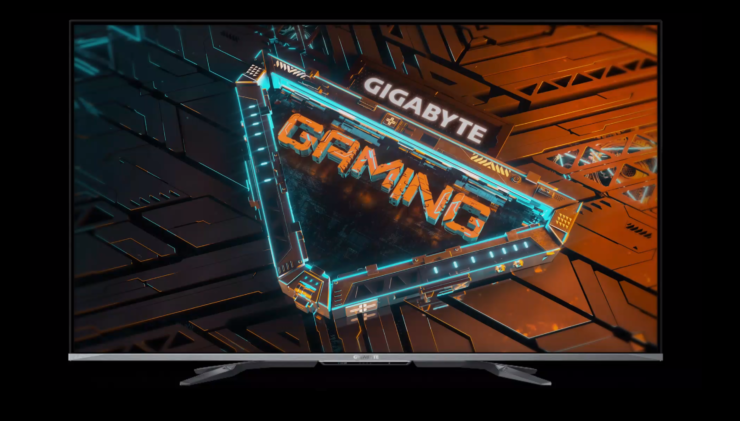 Gigabyte has unveiled its brand new S55U gaming monitor, which has a massive 54.6-inch panel and supports the latest display technologies. You’d wonder Gigabyte why they still call this beast of a screen a “gaming monitor” when it comes across all categories of a gaming and home entertainment TV.

The Gigabyte S55U is a massive 54.6-inch gaming monitor (as the company calls it). To be quite honest, I can’t find any practical use for such a screen as your primary gaming monitor, as the distance you sit at your desk makes it very uncomfortable and unappealing, but for a high-end gaming and entertainment setup in the living room the S55U makes perfect sense. Too bad the folks at Gigabyte’s marketing team didn’t advertise the product as such.

Despite this, the Gigabyte S55U features a 54.6-inch panel with a 4K resolution, a refresh rate of 120 Hz that is said to be suitable for esports, a response time of 2 ms GTG, and it also comes with HDMI 2.1. . includes two HDMI 2.1 (48G, eARC), two HDMI 2.0, two USB 3.2 Gen 1, 1x USB 2.0, 1x headphone jack, an Ethernet port, wireless 802.11ac capabilities and Bluetooth. Considering its size, the whole chassis is big and thick and comes with dual 10W speakers with Dobly Atomos/DTS HD support.

GIGABYTE, the world’s leading gaming hardware brand, has announced the launch of the GIGABYTE S55U gaming monitor, the latest addition to GIGABYTE’s 4K monitor family. The S55U opens up a new segment of gaming monitors with its massive 54.6-inch UHD quantum dot display. In addition to delivering incredible image sharpness and clarity, the S55U steps up the game with its esports-grade 120Hz refresh rate, 2ms GTG response time, and HDMI 2.1 connectivity that promises an immersive, silky-smooth 4K gaming experience on a big screen. The S55U is also Android powered with built-in apps such as YouTube, Netflix and Chromecast for streaming, making it ideal for home entertainment as well.

GIGABYTE has been at the forefront of providing the best 4K gaming monitors since it introduced its very first 4K display last year. The whole family can boast industry-leading HDMI 2.1 support and exclusive tactical gaming features, setting a new standard for 4K gaming displays. GIGABYTE 4K gaming monitors have also been well received by media and communities around the world. The FV43U was named the king of 43-inch gaming monitors by world-renowned media Tom’s Hardware for its industry-leading color and contrast. The 47.53-inch FO48U with an OLED panel won the iF Design Award in 2022 for its unparalleled aesthetics and display performance. Last but not least, the GIGABYTE M Series has been highly acclaimed by the monitor-focused tech media Rtings as the best 4K gaming monitors they’ve reviewed. GIGABYTE now supplies a wide range of 4K gaming monitors ranging from 28 to 54.6 inches for gamers to choose from. The latest S55U brings a whole new dimension to those seeking a fully immersive viewing experience on a large gaming monitor for both gaming and home entertainment.

Now back to why this monitor is more suited to the home entertainment segment as it also comes with Android TV support. Again, the focus is on TV and not a gaming monitor. Gigabyte’s S55U can become a great living room unit for multitasking between movies and gaming. The company has not shared any information about price or launch, but we will try to get it soon.