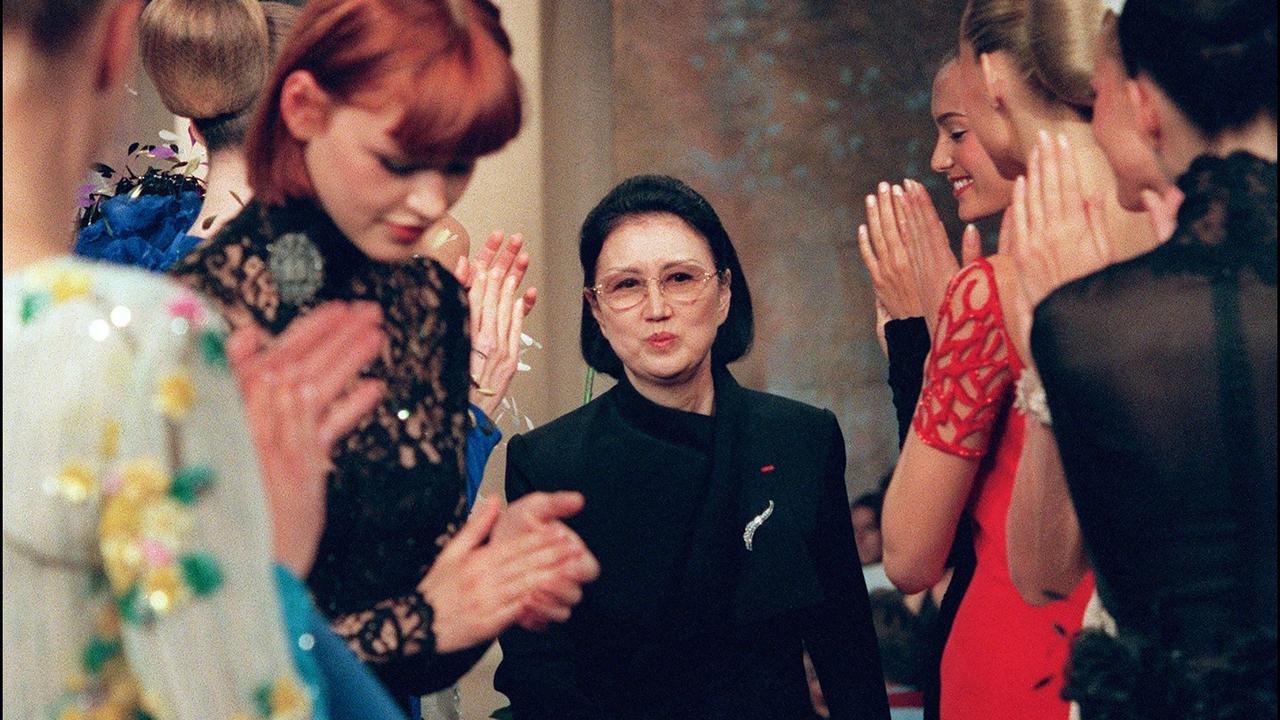 Japanese designer Hanae Mori, who broke into the Parisian haute couture world and was dubbed “Madame Butterfly” for her signature motif, has died in Tokyo at the age of 96.

Over the decades, Mori’s luxurious creations have been worn by Nancy Reagan, Grace Kelly, and countless members of high society.

But she was also a pioneer for Japanese women, one of the few to lead an international company.

An employee of Mori’s office said on Thursday that she died “of old age” at home on August 11 and that a private funeral had taken place.

The designer’s pioneering career took her from Tokyo, where she began making costumes for the cinema, to New York and Paris – and in 1977 her label became the first Asian fashion house to join the tenuous ranks of haute couture. .

“When people work with their hands, their creativity increases,” Mori told AFP at a 2006 retrospective in Tokyo, where a robot modeled a replica of her classic “Chrysanthemum Pajamas” — a kimono-like robe made of bright pink chiffon and silk .

In January, the designer summed up her feelings for the industry in a special column for Japan’s Yomiuri Shimbun daily.

“Fashion is something that pushes you, gives you courage to spread your wings and allows you to have adventures,” she said.

Born in 1926 in a rural corner of western Japan, Mori studied literature at Tokyo Women’s Christian University before turning her hand to design.

She opened her first studio above a noodle shop in Tokyo and specialized in dressing the stars of the silver screen.

As Japan’s post-war economy grew, so did her business, which she ran with her husband – a textile manager who encouraged her to visit Paris and New York when the advent of television made the film industry less profitable.

“This was kind of a turning point for me,” she once said of the early 1960s travels, meeting Coco Chanel in Paris.

It was an inspiring meeting.

Stepping into Chanel’s studio, the iconic designer suggested she wear something in bright orange to contrast with her black hair.

Surprised, it made Mori think.

“The whole Japanese concept of beauty is based on concealment… I suddenly realized that I had to change my approach and make sure that my dresses help a woman stand out,” she said, according to the Washington Post.

In 1965, Mori unveiled her first collection abroad, in New York, under the theme “East Meets West”.

Her designs combined traditional patterns such as cranes and cherry blossoms – and her signature butterflies – with western styles, from wool suits to sharp satin tailoring.

Mori moved her brand from Tokyo to Paris in the late 1970s and was soon embraced by fashion insiders.

She saw a distinction between herself and her Japanese peers who later made a worldwide name for herself – such as Issey Miyake, Yohji Yamamoto and Rei Kawakubo of Comme des Garcons fame.

“The young Japanese designers living in Paris are passionately avant-garde,” she told the Washington Post. “I am not. I like to follow the traditional way.” Mori built her brand into a business empire, which in its heyday spanned an entire building in Tokyo designed by the architect Kenzo Tange – later torn down and replaced by another building with quintessential Japanese pace.

From the loss of the building to the retirement of her haute couture fashion house, “not everything was positive,” she reflected in her Yomiuri column.

“It was as if my butterfly wings had been torn off. But this butterfly was able to fly all over the world for 70 years because I loved making clothes.”

‘Wanted to be different’

Mori designed the dress Princess Masako – now Empress – wore to her wedding in 1993, as well as the uniforms for Japan Airlines flight attendants.

And in 1985 she created stage costumes for, appropriately, “Madame Butterfly” performed at La Scala in Milan.

But with increasing losses in the early 2000s, her empire was largely sold and she closed her Paris studio in 2004 after her last couture show there.

As a powerful businesswoman, Mori was a rarity in Japan, where boardrooms are still heavily dominated by men.

Speaking of her early married life, she once remarked that she was never invited with her husband’s friends.

At the time, Japan was a gentlemen’s country, she said, but I wanted to be different.