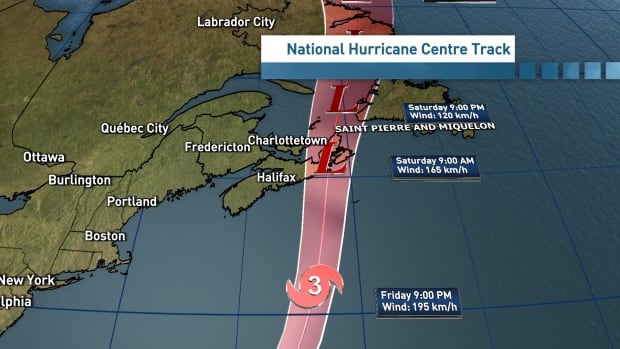 Prior to Hurricane Fiona’s landfall, residents are wondering how this storm might compare to two other major weather events in Nova Scotia’s history: Hurricane Juan in 2003 and Hurricane Dorian in 2019.

Bob Robichaud, a meteorologist warning for preparedness at Environment Canada, said in a briefing Thursday that Hurricane Fiona is an “extremely strong and dangerous storm.”

“Will it be as strong as… [Hurricane] Juan when Juan made landfall in 2003 where there were extreme winds, but they were concentrated over a small area?” he said. “This storm will be bigger compared to what Juan was, but maybe a little stronger than what we have seen with Dorian.”

In late September 2003, Juan hit the coasts of Nova Scotia near Shad Bay as a Category 2 hurricane. Some parts of the province saw wind speeds exceeding 130 km/h.

On McNab’s Island at the entrance to Halifax Harbor, winds were 176 km/h during the storm.

St. Margarets Bay saw the bulk of the rainfall, with more than 50 millimeters of precipitation as the storm swept across central Nova Scotia.

Nova Scotia Power says Hurricane Dorian was by far the most damaging storm the utility has ever had — a title once held by Juan.

Dorian was generally larger, making landfall as a post-tropical storm south of Halifax at Sambro Creek with gusts of 155 km/h, but producing gusts of about 100 km/h over most of Nova Scotia.

That storm followed mostly diagonally across central Nova Scotia, dropping nearly 140 millimeters of rain in some parts of the province.

It is expected to follow the eastern mainland of Nova Scotia and Cape Breton.

Robichaud said at a briefing Friday afternoon that the province can expect between 100 millimeters and 150 millimeters of rain, although some areas could see more.

Saturday at 9 a.m. local time, winds from Fiona are expected to reach 165 km/h.