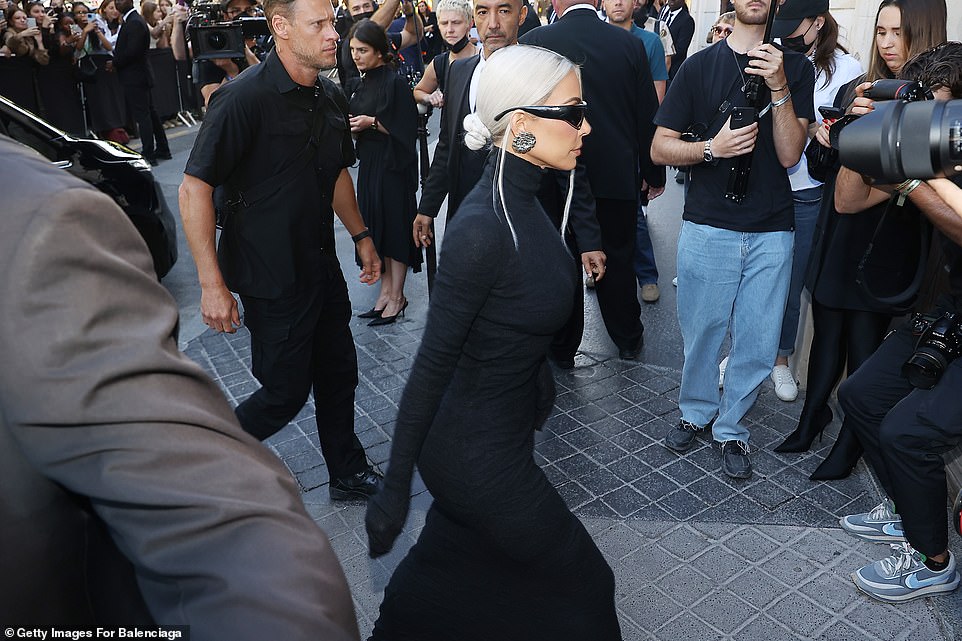 Reality star Kim, 41, cut an elegant figure as she arrived at the star-studded event in a figure-hugging, long-sleeved black dress.

The garment also featured a high collar, while Kim – who was joined by her daughter North West, nine – fashioned her platinum locks into an updo.

The Keeping Up With The Kardashians star, who also wore sunglasses, topped off her outfit with a pair of silver oversized earrings.

Supermodel Bella, 25, opted for a trendy look for the event as she arrived in a black mini dress that highlighted her toned pins.

The fashion forward star also wore a sleeveless black jacket and added a casual touch to her outfit with a pair of black sneakers and white socks.

Bella set her locks in a sleek updo and complimented her look with a black handbag and red-rimmed sunglasses.

Glamour: Kim cut an elegant figure as she arrived at the star-studded event in a figure-hugging, long-sleeved black dress

Emily, 31, showed off her stunning figure in a black strapless top which she wore with flared pants.

The model tightened her waist with a matching belt and enhanced her already stately body with a pair of black heels.

The star let her dark brown locks fall loosely over her shoulders and accentuated her natural beauty with a light makeup palette.

Nicole Kidman turned heads at the star-studded event when she once again donned oversized Balenciaga sunglasses. 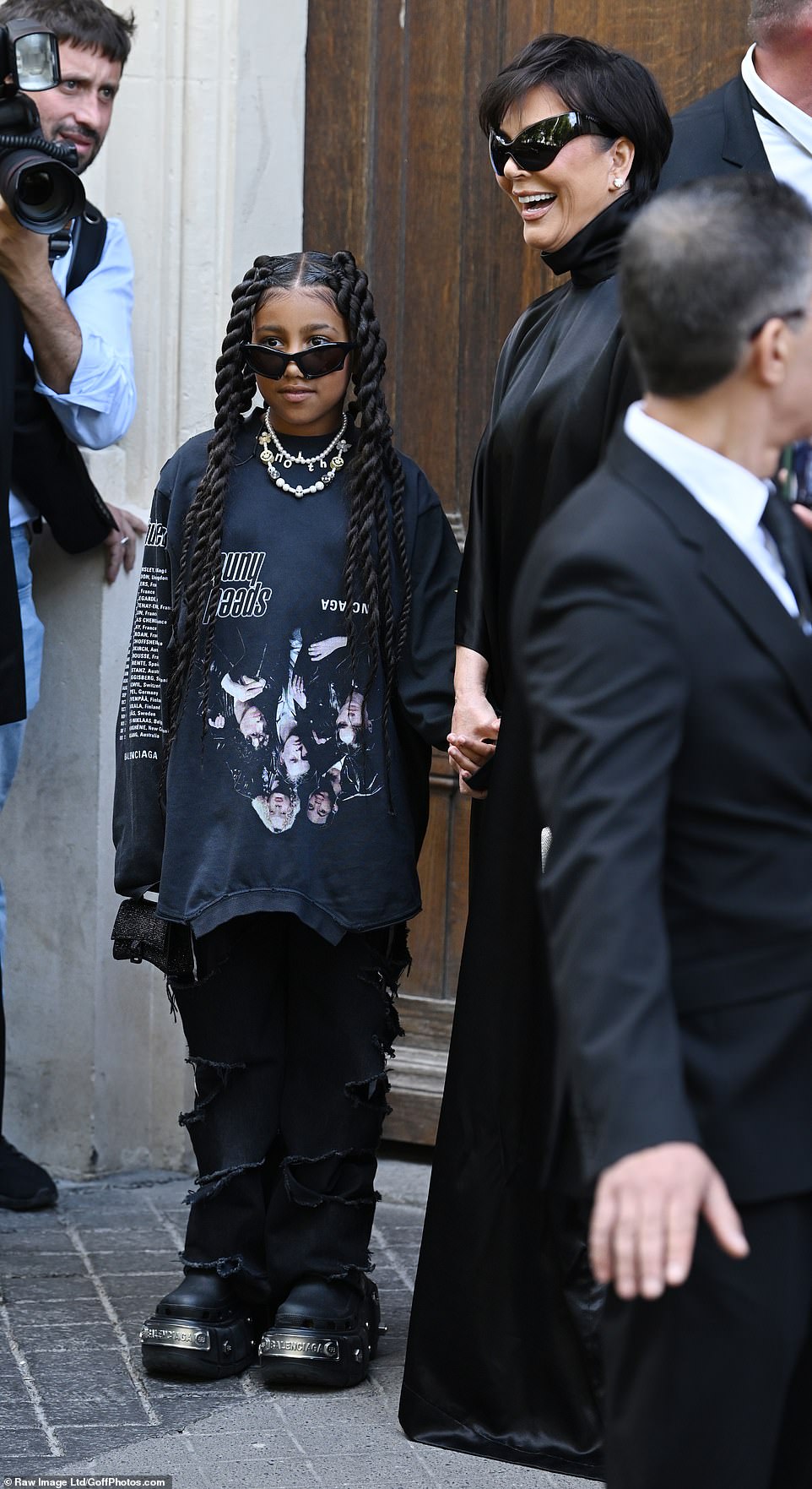 Family: Kardashain matriarch Kris looked cheerful as she posed for a photo with her granddaughter North West

Attendees: Emily let her dark brown locks fall loosely over her shoulders as she blew a kiss at the camera as Vogue editor Anna Wintour arrived in a white midi dress with a polka dot print 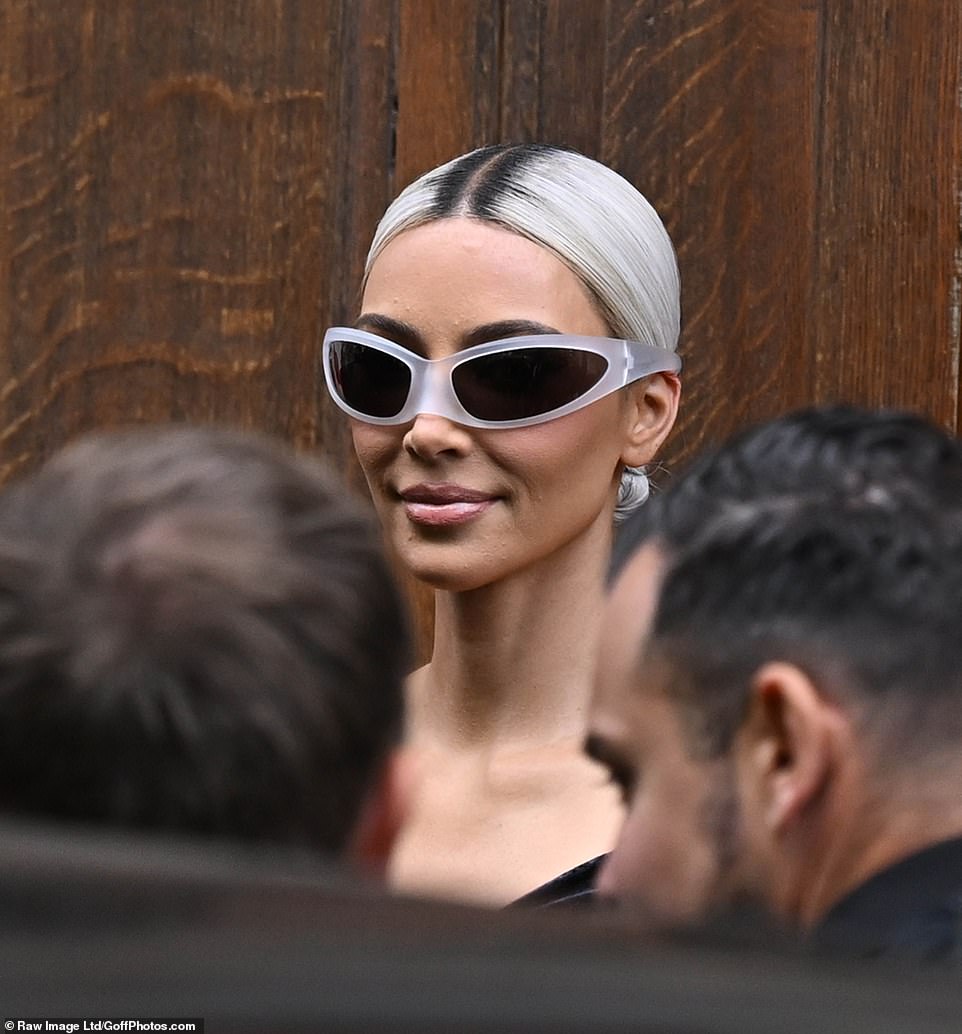 Radiant: Kim donned large silver-framed sunglasses and accentuated her natural beauty with a touch of makeup 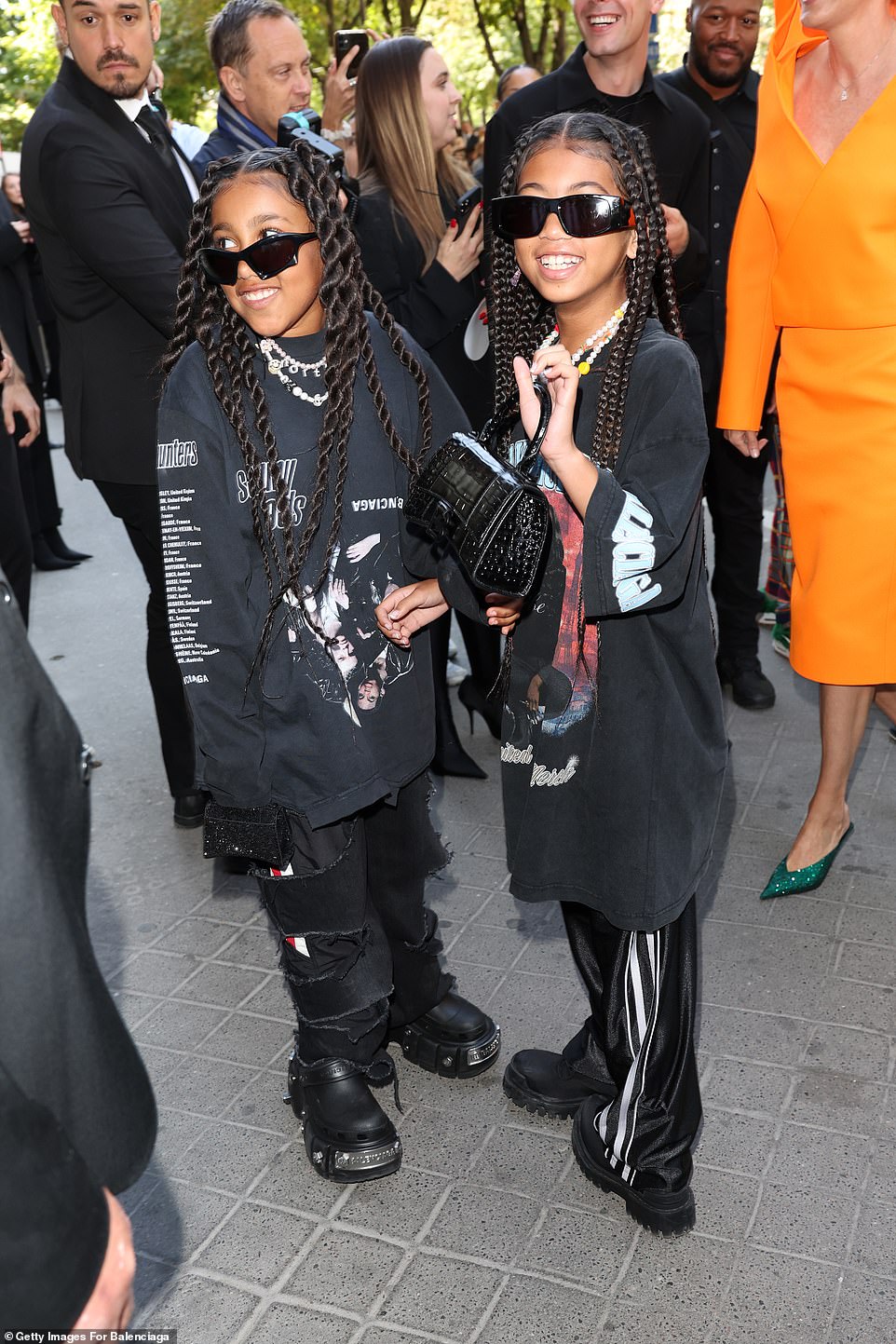 Adorable: North grinned from ear to ear when joined on the show by Ryan Romulus, daughter of Kim’s executive assistant Tracy Romulus

The Big Little Lies star, 55, was seen wearing the bow tie-shaped covering as she left a Balenciaga fitting on Tuesday.

For the fashion show, Nicole wore a black blouse with a large bow detail and paired it with an alligator print skirt.

The actress added height to her frame with a pair of black heels and styled her blonde locks in loose waves for the day.

Meanwhile, Kris Jenner arrived at the event in a black long-sleeved dress with a high collar.

The momager added to her outfit with a silver clutch and sunglasses as she posed for the cameras ahead of the event.

Kris was accompanied by her granddaughter North West, who wore a black Balenciaga long-sleeved shirt and ripped black jeans. 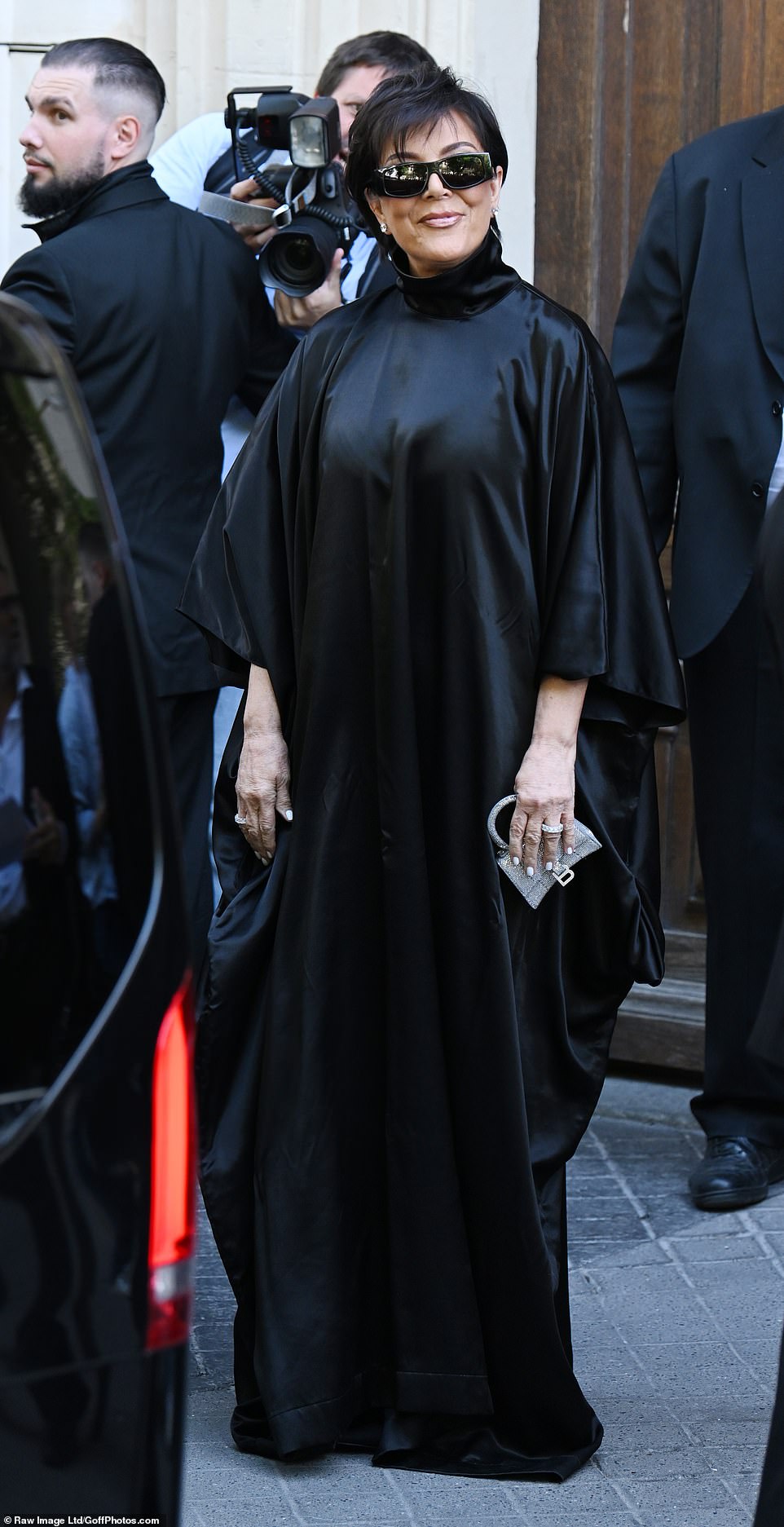 Elegant: Kris added a silver handbag and sunglasses to her outfit as she posed for the cameras ahead of the event 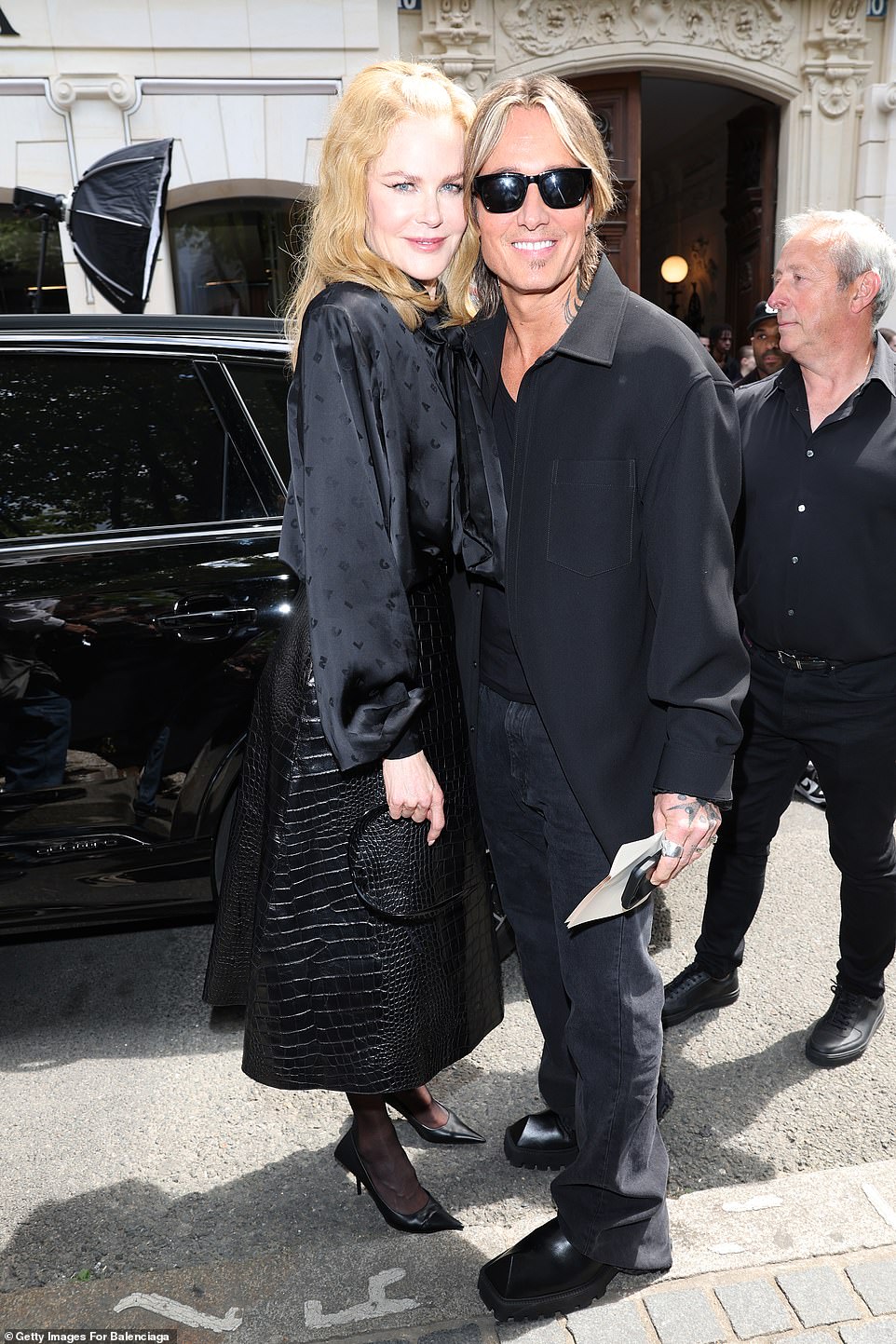 Couple: Nicole was accompanied by her husband Keith Urban, who wore a black shirt with jeans and a blazer

Amazing: Dua Lipa’s sister Rina came to the show in a black corset along with flared pants

North – who shares Kris’ daughter Kim with ex Kanye West – also wore a pair of black boots and large sunglasses while her locks were styled in braids.

The garment featured a pleated detail, while the Vogue editor also sported her signature sunglasses and signature bob.

Actress Michelle Yeoh turned heads when she arrived at the show in a black long sleeve dress with a ruffle detail on the chest. 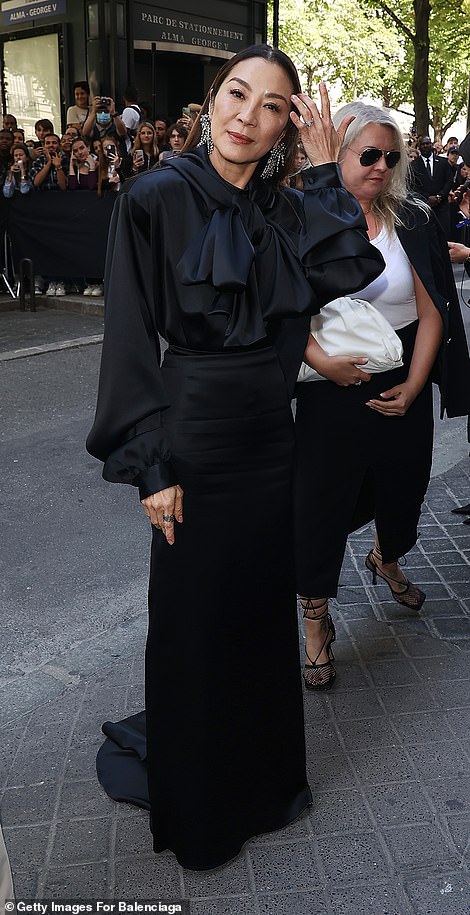 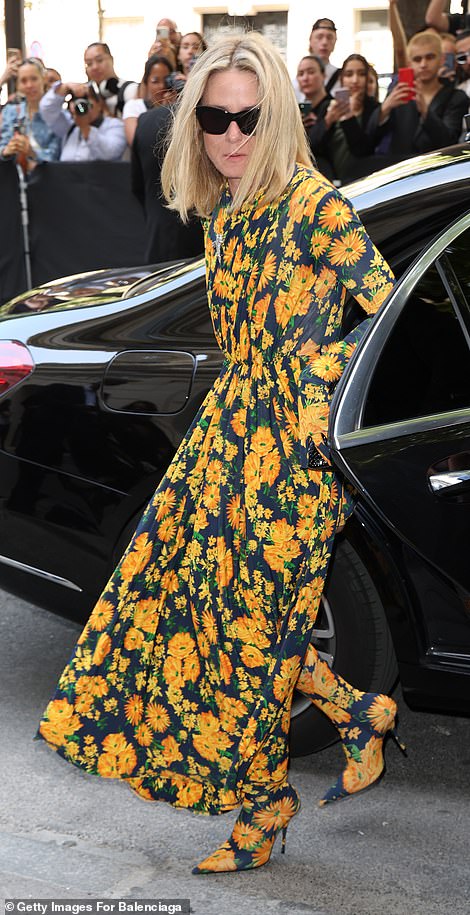 Guests: Michelle Yeoh stood out as she arrived at the show in a black long sleeve dress with a ruffle detail down the chest, while Cici Bussey – a cousin of the Kardashian family – donned a green and yellow floral dress 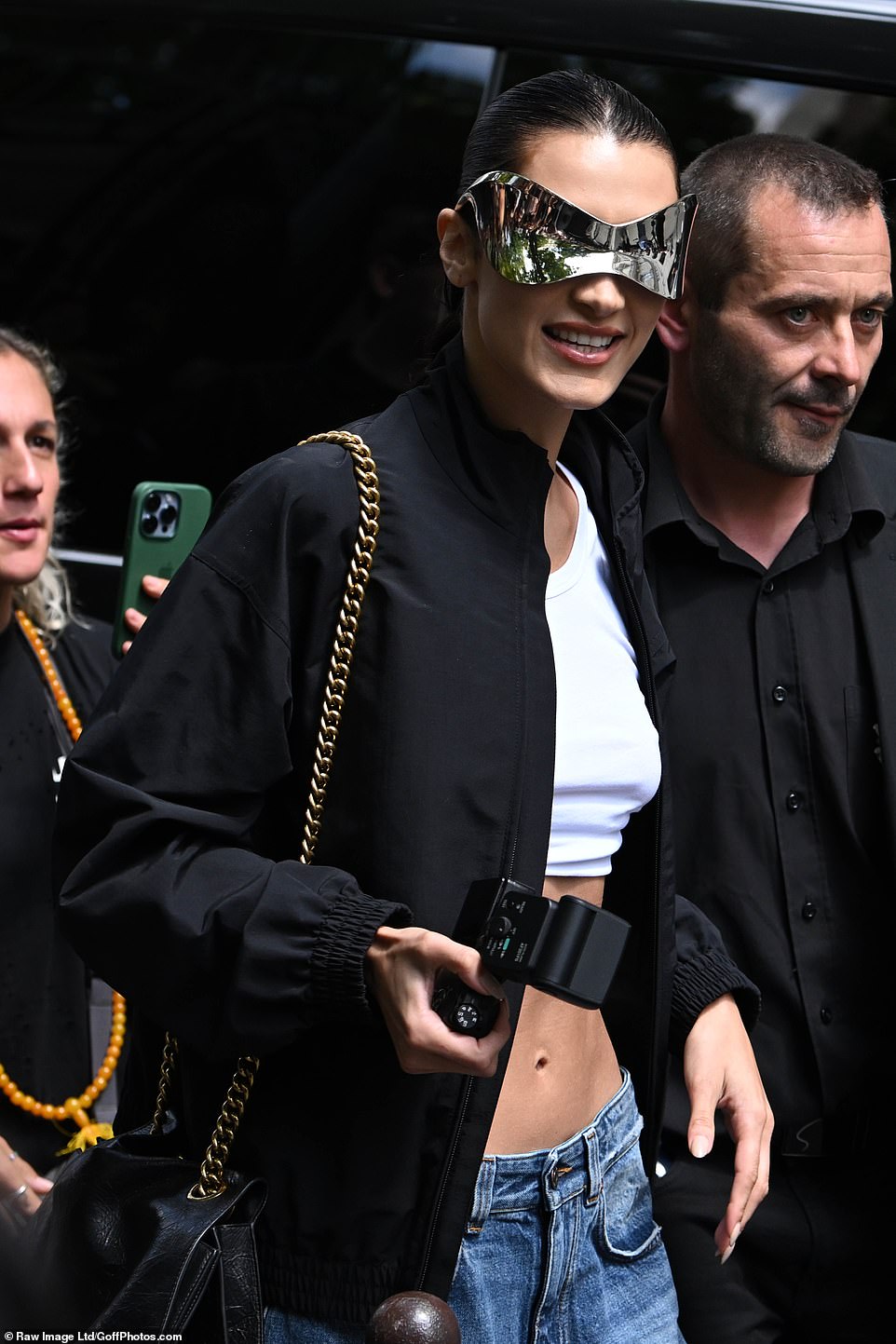 Beauty: Bella was all smiles as she greeted dozens of fans who lined the streets of Paris during the event

The Memoirs Of A Geisha star sported her locks in a poker style and drew even more attention to her look with a pair of silver earrings.

Carrying a large black handbag, the model added glamor to her look with a light palette of makeup and a smokey eye. 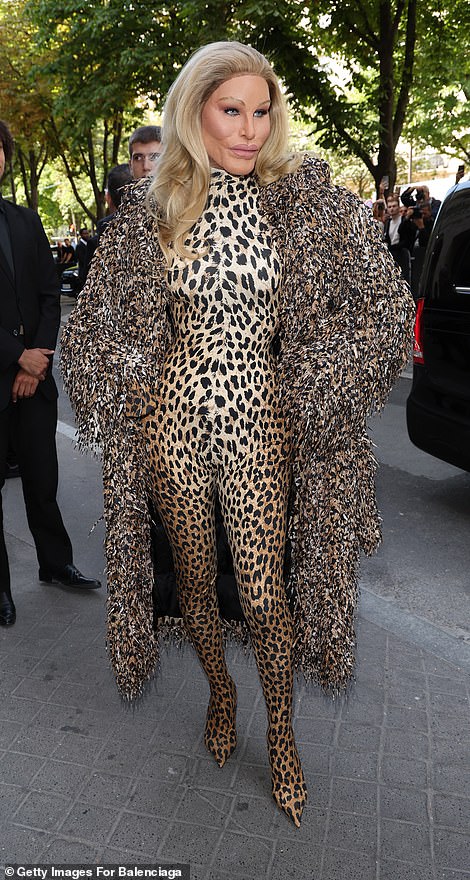 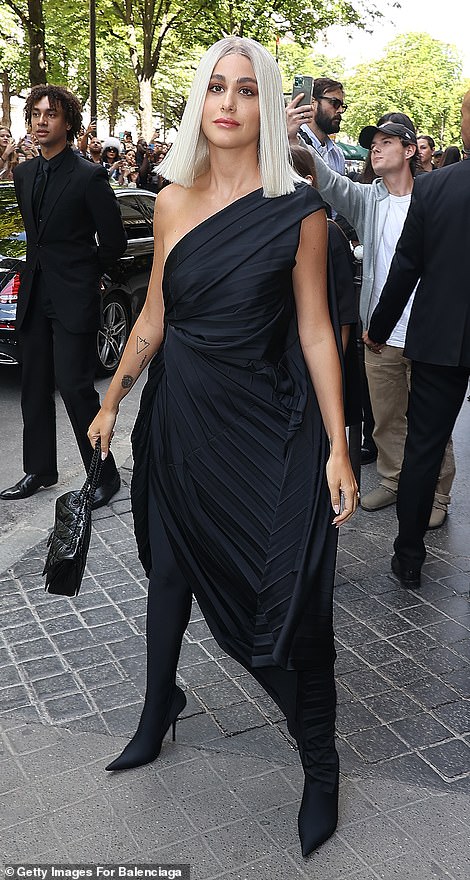 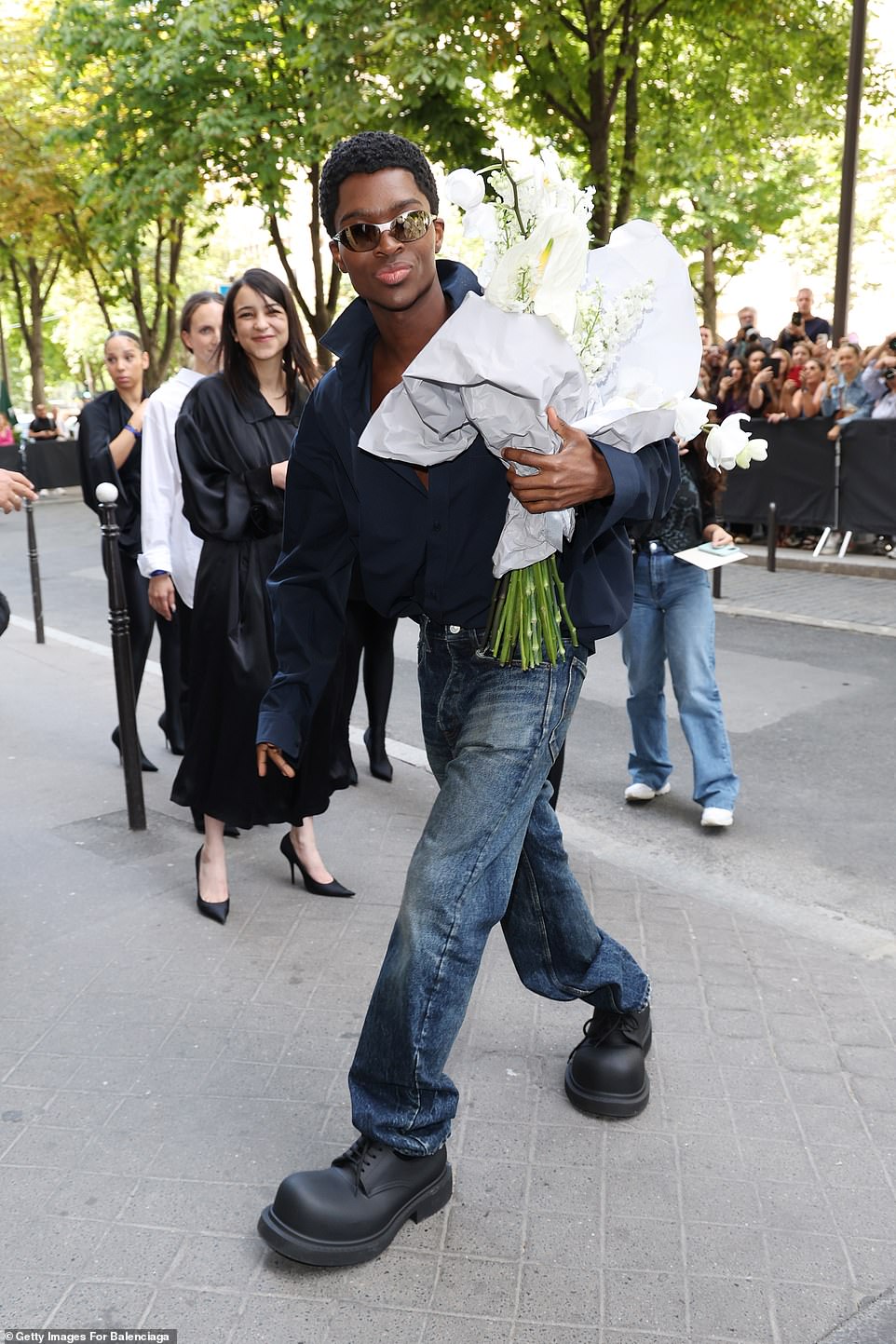 Casual: Model Alton Mason wore a large bouquet of flowers when he came to the show in a navy blue jacket and blue jeans

Dua Lipa’s sister Rina came to the show in a black corset along with flared pants, while also wearing gold sunglasses and a matching necklace.

Offset also went for an all-black look for the runway show, donning an open shirt with flared trousers and a trench coat.

Bella Hadid opted for a different look after the show as she left in a white crop top and jeans with a black jacket. 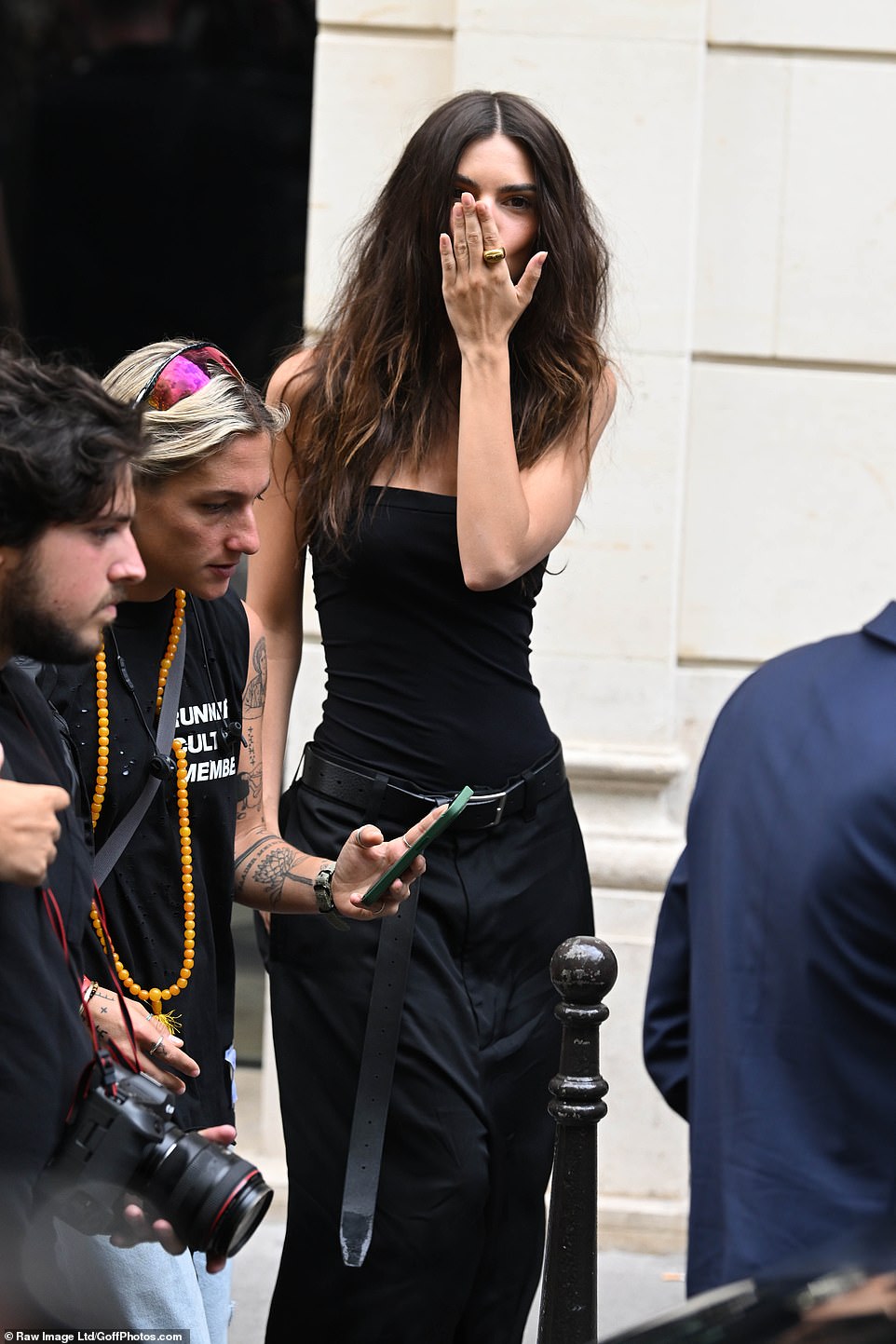 Smooch: Emily blew a kiss for the cameras while mingling with other guests for the ceremony