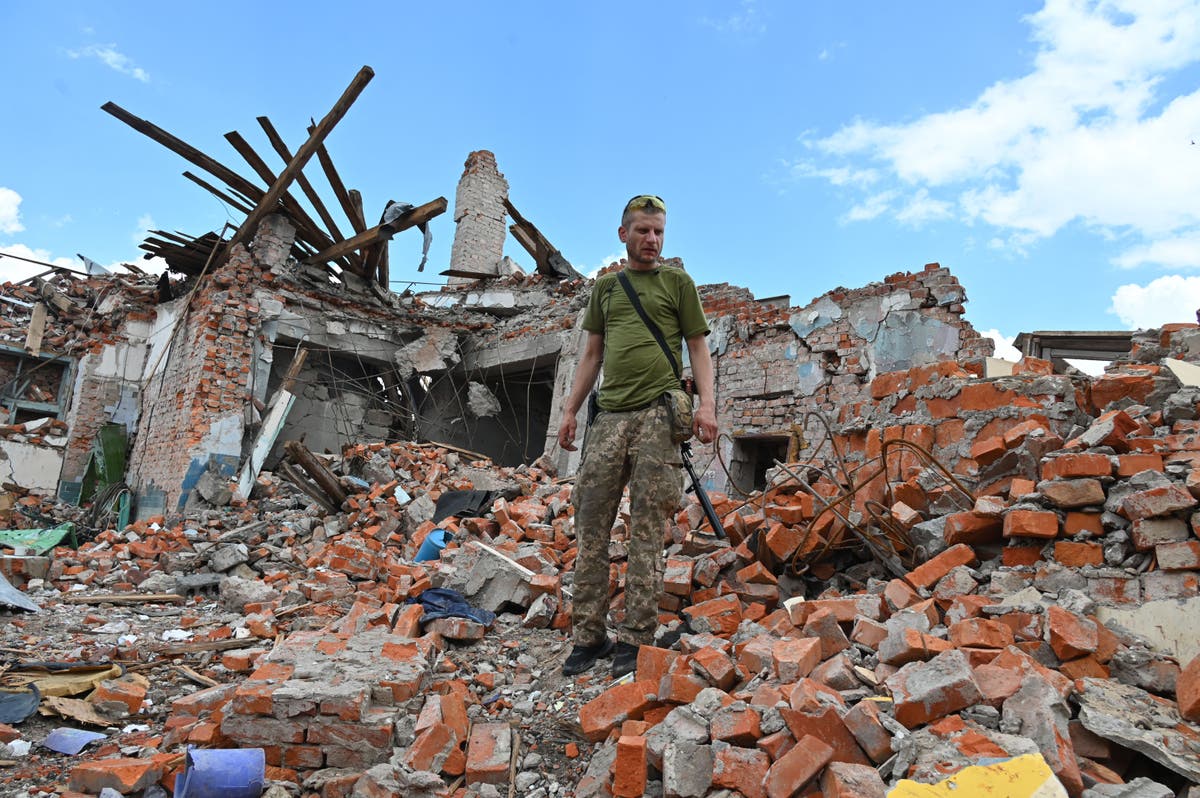 Vladimir Putin’s troops are on their way to Donetsk amid Russia’s plan to take the entire Donbas region of eastern Ukraine.

It comes just days after the Russian president declared a “big victory” in neighboring Donetsk on Monday.

Both regions — which have been controlled by Moscow-backed separatists since the start of the invasion of Ukraine — have suffered massive damage as Putin’s forces “fired on everything in their path”.

This is according to Luhansk governor Serhiy Haidai, who said Russia has taken the cities of Lysychansk and Severodonestk in his region.

Haidai told Ukrainian television, according to Reuters: “A large amount of equipment is being sent to the Donetsk region. After the Luhansk region, Donetsk is of course at the top of their list.”

He added: “There is still a lot of shelling in both the Luhansk and Donetsk regions … They are suffering quite heavy losses.

“Some battalions have been moved there to get the numbers needed… They don’t take all their wounded with them. The hospitals are bulging, just like the morgues.”

Russian shelling has reportedly killed at least five civilians in the past 24 hours and injured 21 in the eastern Donetsk province, where Russia has stepped up its attack in recent days. Donetsk governor Pavlo Kyrylenko said in a Telegram post this morning that two people have been killed in Avdiivka, one in Sloviansk, one in Krasnohorivka and one in Kurakhove.

He wrote: “Every crime will be punished.” On Tuesday, Kyrylenko urged 350,000 residents of the area to leave, saying an evacuation of Donetsk is necessary.

About 1,000 Ukrainian children are reported to have been killed or injured during the Russian invasion of their country.

The Ukrainian prosecutor’s office said 346 children were killed and more than 645 were injured.

It said: “As of the morning of July 6, 2022, more than 991 children in Ukraine suffered as a result of Russia’s large-scale armed aggression.

“According to official information from juvenile prosecutors, about 346 children have been killed and more than 645 injured.

According to the figures, 2,108 schools have been damaged and 215 completely destroyed by Russian forces.

Commission chief Ursula von der Leyen called on the EU to make contingency plans to prepare for a complete shutdown of Russian gas.

The EU has already imposed sanctions on Russia, including on some energy supplies.

Ms von der Leyen told the European Parliament in Strasbourg: “We must now also prepare for a further disruption of the gas supply and even a complete shutdown of Russia’s gas supply.”

Two people killed in shelling of Sloviansk in Donetsk . region

The death toll from shelling in the Ukrainian city of Sloviansk has risen to two, according to Mayor Vadym Liakh.

Seven people were injured in the attacks by Russian troops on Tuesday, he said.

Mr Liakh said on Facebook: “According to the results of yesterday’s shelling, we have two dead and seven injured.

“In total, some 17 people have been killed and 67 injured in the community since the large-scale hostilities began.”

The city is located in the Kramatorsk district of the Donetsk region of Ukraine.

The British Ministry of Defense has warned that “there is a real possibility that the battle of Sloviansk will be the next important match in the battle for the Donbas”.

Russia has lost 36,500 soldiers, 1,600 tanks and 3,789 armored fighting vehicles since February – according to the General Staff of the Armed Forces of Ukraine.

Foreign ministers from G20 countries will discuss the war in Ukraine and its impact on global energy and food security at their meeting in Indonesia this week.

Russian Foreign Minister Sergey Lavrov is among those expected to attend the Bali meetings.

Also in attendance are US Secretary of State Antony Blinken and Chinese Foreign Minister Wang Yi.

It will be the first time Lavrov and Blinken have been in the same place since January, the month before Russia launched its invasion of Ukraine.

The US State Department said there would be no formal meeting between the two.

“We would like the Russians to take diplomacy seriously,” said US spokesman Ned Price.

“We haven’t seen that yet. We would like the Russians to give us a reason to meet with them on a bilateral basis, with Foreign Minister Lavrov, but all we have seen coming from Moscow is more brutality and aggression against the people and the country of Ukraine.”

Sergei Lavrov seeks support for Russia during trip to Vietnam

Russian Foreign Minister Sergey Lavrov has arrived in Vietnam to seek support during his country’s invasion of Ukraine.

In pictures, he walks with a Vietnamese army official to lay a wreath at Ho Chi Minh’s mausoleum in Hanoi.

Yesterday, Lavrov was in Mongolia where he met his Mongolian counterpart Battsetseg Batmunkh and President Ukhnaagiin Khurelsukh. They discussed a partnership, including on trade, investment and environmental protection.

Prime Minister of Ireland arrives in Kiev for solidarity meetings

Irish Prime Minister Michael Martin arrived in Kiev today for a series of meetings in which he will reiterate Ireland’s solidarity with Ukraine amid the Russian invasion.

He will discuss how Ireland and the EU can support the country and will also witness firsthand the damage done by Vladimir Putin’s forces.

Mr Martin would reaffirm Ireland’s full support for the ongoing sanctions against the Russian President’s regime, Ukraine’s progress towards full EU membership and Ireland’s determination to work with the EU to rebuild Ukraine.

He said: “The Irish people stand with Ukraine and its people in the face of Russia’s immoral and unprovoked terror war.

“The bombings and attacks on civilians are nothing short of war crimes and I will use my visit to express Ireland’s support for measures to hold those behind these attacks fully accountable.

“The spirit and determination of the Ukrainian people has inspired us all and Ireland will give full support to Ukraine’s path to full EU membership, and will continue to welcome and support civilians fleeing this war.”

The battle for Sloviansk in Donetsk will be the next big game in Ukraine, UK claims

The British Ministry of Defense has said that Russian troops are advancing in various parts of eastern Ukraine, such as Izium, and building a combat situation in Sloviansk in Donetsk.

“In the past week, Russian forces have likely moved up to another 5 km along the E40 main road from Izium, despite extremely determined Ukrainian resistance,” the ministry said in its latest intelligence update on Wednesday.

It added that Russian troops of the Eastern and Western Armed Forces Groups are now likely about 10 miles (16 km) north of the city of Sloviansk.

“With the city also under threat from the Central and Southern Groups of Forces, there is a realistic possibility that the battle for Sloviansk will be the next major game in the battle for the Donbas,” the British Ministry of Defense said.

It added: “Russia is likely to continue to consolidate its control over Lysychansk and Luhansk Oblast. In the north, it has sent most of the remaining available units of the eastern and western groups of forces to the Izium axis.

Who will last longer in power, Johnson or Zelensky?

When Boris Johnson called Ukrainian President Volodymyr Zelensky on Tuesday, it was a small surprise.

It showed Mr Johnson resorting to his traditional playbook in which he once again tried to portray himself as a world leader, a serious man for serious times, deviating from events as Westminster burned around him, set ablaze by its own lies and shortcomings, writes International Affairs Editor David Harding in this editorial.

He also points to a recent pub discussion about the sustainability or lack thereof of world leaders.

It was also a game of not only what-ifs, but also what could be. From the point of view of Putin’s logic, there seems little reason to end the war. If the conflict can somehow extend into the next US presidency, who knows what could happen?