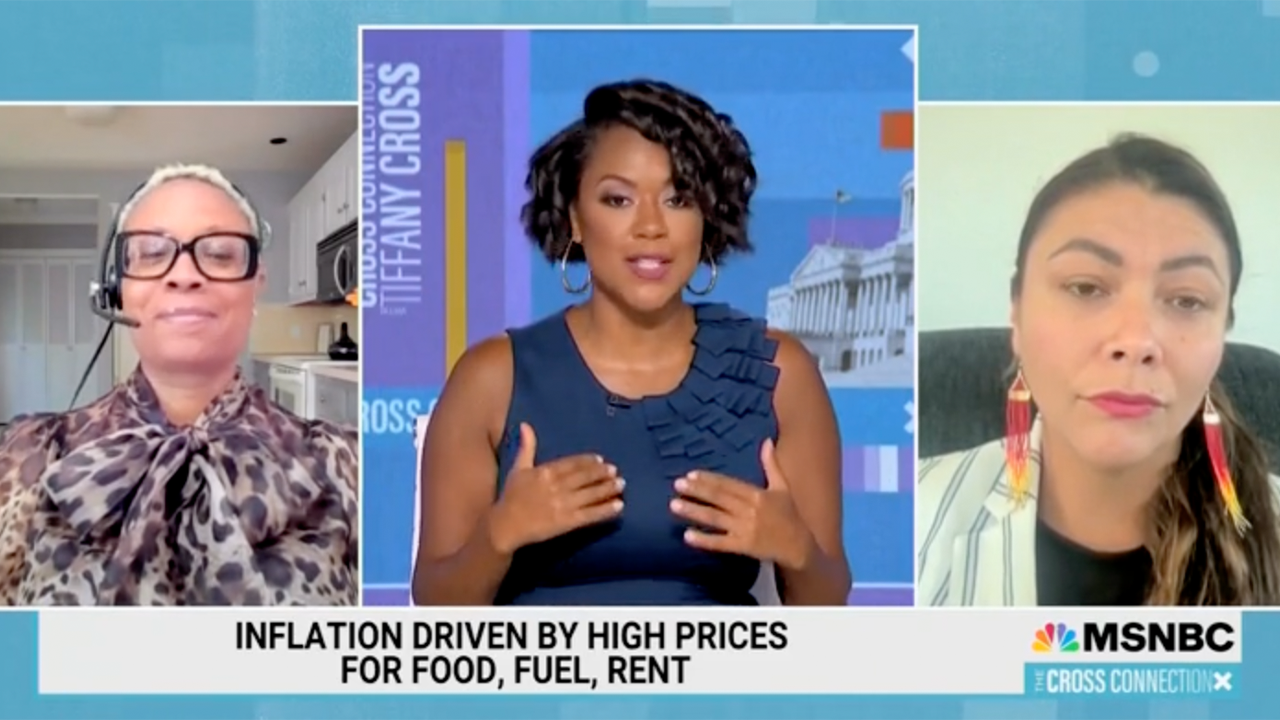 On the latest episode of MSNBC’s “The Cross Connection with Tiffany Cross,” the host expressed frustration with claims the economy is doing better, stressing that it’s “not doing any better for us,” which is minority communities.

On Saturday, Cross spoke with guest panelists Georgetown Law professor Dorothy Brown and UCLA professor Desi Small-Rodriguez about how the economy is currently the hardest for African American and Indigenous communities compared to what it’s like for white people.

Cross sparked the discussion with an NPR survey that showed which demographics feel inflation the most. According to the poll, 69% of Native American families face “severe financial hardship due to inflation,” as do 58% of Black families and 56% of Latino families.

44% of white families face serious problems due to inflation.

MSNBC’s Tiffany Cross complained on Saturday that the economy for minorities does not appear to be improving.

Brown gave her analysis of the economic pressures African Americans face, stating, “Part of it is a supply chain issue. Part of it is corporate greed. We’ve seen rents go through the roof. We’ve seen landlords make heavy demands on people getting apartments.”

Brown added, “Food has skyrocketed,” and while “we’ve seen gas prices come down,” “they’ve been high for quite some time.”

Speaking specifically about the Native American community’s plight in the economy, Small-Rodriguez stated, “Now we see only immense struggle, strengthening so much struggle.”

She continued: “Inflation is just part of it. We see, you know, we live in food deserts. We struggle with just basic survival. And it’s nothing new. But alas, but we see, you know, all over the United States. States is being strengthened in our communities.”

“So we’re just kind of seeing an increasing impact from COVID, inflation and from just, you know over 500 years of colonization to be honest,” the guest concluded, adding that imperial oppression is one of the factors here.

Discouraged by the reports of both professors, Cross dismissed the media’s somewhat optimistic spin on the economy.

According to NPR, inflation hits the African American community the hardest.
(stock)

“Some of the challenges I have in the mainstream media, and you hear things like, ‘Oh, the economy is getting better.’ And for many of us, the economy isn’t the stock market. We’re not getting any better,” she said.

Cross then claimed that the minority community is not involved in these talks about the economy. “And when you’re having these conversations, sometimes it feels like there’s such a disconnect between us and the community, we feel left out,” she claimed.

Perhaps Cross’s frustrations stem from the Biden administration’s over-optimistic view of the economy, which has been imitated by its media allies. While inflation in the US is still high for nearly 40 years, Biden has claimed “zero percent” inflation for the month of July.

Columnists like Paul Krugman of the New York Times have defended the statement, claiming the economy is improving as the president oversees job growth. Although, according to Cross’ panel, they haven’t quite seen it yet.

MSNBC’s Tiffany Cross expressed frustration that the media is claiming that the economy has improved under Biden.
(Getty images)