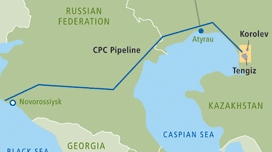 A Russian court on Wednesday (July 6) ordered the “temporary closure” of the Novorossiysk oil terminal, which is critical to the export of Kazakh oil, just two days after President Kassym-Jomart Tokayev told Council President Charles Michel. told his country is ready to send more oil to the EU.

According to press reports, a Russian court has temporarily closed the Caspian Pipeline Consortium (CPC) oil terminal in Novorossiysk due to “environmental concerns” in a shutdown that will last for 30 days, a CPC statement said.

Novorossiysk’s terminal is often closed and was closed earlier in June due to the reported discovery of 50 World War II explosives in the waters of the port. It was also shut down in March due to damage sustained during a storm. During the three-week shutdown, the world market lost about a million barrels of oil.

The ruling of the Russian court comes two days after a telephone conversation between Tokayev and Michel.

According to a press release from Tokayev’s office, he said that “Kazakhstan could contribute by acting as a “buffer market” between East and West, South and North” over “the deepening geoeconomic rifts”.

Kassym-Jomart Tokayev also expressed concern about the risks to global energy security and emphasized Kazakhstan’s willingness to “use its hydrocarbon potential to stabilize the situation in the world and European markets”.

Kazakhstan is rich in oil and gas. However, it needs the gas for its own consumption and there is no pipeline to export Kazakh gas to the EU. On oil, there is scope to increase exports to mitigate reduced Russian flows due to EU sanctions.

Last month, Kazakhstan named its exports through Russian seaports to Kazakhstan Export Blend Crude Oil (KEBCO) to separate it from oil from Russia to avoid sanction risks and financing problems.

Although Kazakhstan is a member of the Russian-led Eurasian Economic Union and the Collective Security Treaty Organization, Tokayev said his country would not recognize the breakaway so-called “Republics” of Donetsk and Lugansk.