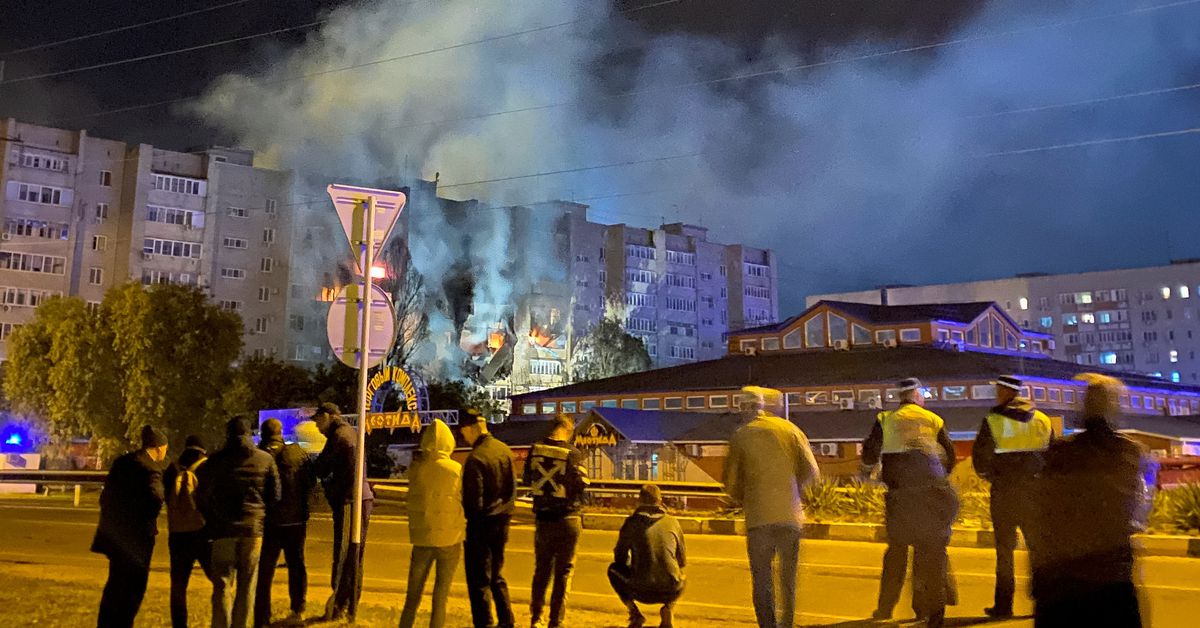 YEYSK, Russia, Oct. 17 (Reuters) – A Russian fighter jet crashed into a residential building in the southern city of Yeysk on Monday, engulfing apartments in a fireball and killing four people, officials said.

Another six people were missing.

Military news channel Zvezda has released a video showing explosions aboard the Sukhoi Su-34 supersonic medium-range fighter-bomber that plunged into the apartments. Russian agencies said the pilots had been ejected.

Anna Minkova, deputy governor of the Krasnodar region, previously wrote on Telegram that three people had died and another 10 had been taken to hospital for smoke inhalation.

Authorities have reserved 600 beds in hotels and guest houses to accommodate those who had to leave the building, RIA said.

A view shows a site of a plane crash on a residential building in the southern city of Yeysk, Russia, Oct. 17, 2022. REUTERS/Stringer

Footage from the site showed that large parts of the building were on fire after the crash. Local authorities later said the fire had been extinguished.

State-owned RIA said the crash occurred during a training flight from a military airport. It quoted the Department of Defense as saying that the pilots had reported that an engine had caught fire on takeoff, and that the plane’s fuel had ignited when it hit the building.

The Russian state commission of inquiry, which deals with serious crimes, said it had opened a criminal case and sent investigators to the scene.

The Kremlin said President Vladimir Putin had ordered all necessary aid to be provided to the victims. He ordered the health and emergency ministers to fly to the region.

“The fire hit several floors at once. Seventeen apartments were damaged for the time being,” he said on Telegram.

The incident comes almost eight months after Russia sent its troops to Ukraine. Yeysk is separated from occupied Russian territory in southern Ukraine by a narrow stretch of the Sea of ​​Azov.