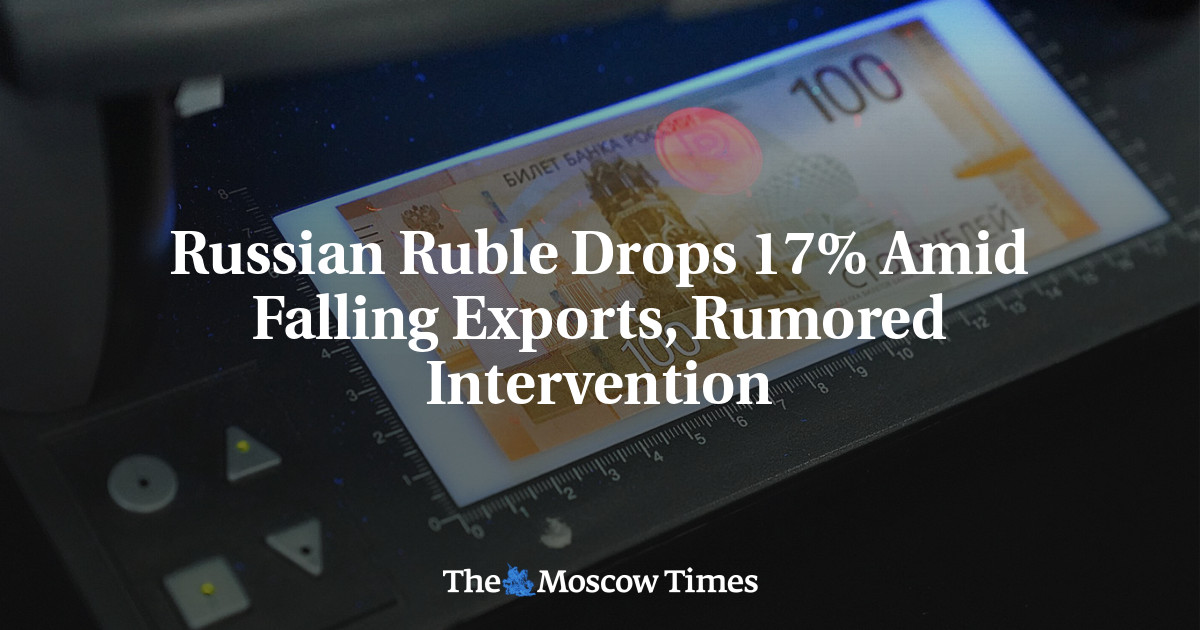 The Russian ruble sustained a recent slump on Thursday, falling 17% against the US dollar in 48 hours to hit its lowest level since late May.

The ruble hit 64.5 against the greenback during morning trading on the Moscow stock exchange, when Russian authorities apparently intervened in foreign exchange markets to prevent the ruble from strengthening and energy exports to Europe plummet.

After a currency collapse when the Kremlin ordered troops into Ukraine in February, the ruble rose dramatically due to falling imports and a series of currency controls imposed by authorities. But officials have been warning that the ruble’s strength – which approached 50 against the US dollar last week – could be damaging to the Russian economy as it dents Russia’s revenues from selling goods abroad.

Finance Minister Anton Siluanov said last week that the government was considering intervention in the foreign exchange markets to ease upward pressure on the ruble.

Falling volumes of Russian energy exports would also weaken the ruble. †[Lower gas sales to Europe] would mean a drop in export revenues and, as a result, a drop in foreign exchange sales in the market,” said Alfa Bank chief economist Natalia Orlova, told independent media outlet The Bell on Tuesdays.

Exports are expected to fall further next week amid a planned 10 days closure of the Nord Stream gas pipeline.

While the ruble’s gains since the invasion — making it the world’s best-performing currency — was touted by some Russian officials as a sign that the economy had shaken off Western sanctions, the exchange rate began to cause problems.

A growth of one ruble in the value of the Russian currency equates to the loss of up to 200 billion rubles ($3 billion) in government revenues, Siluanov told a meeting of the Russian Union of Industrialists and Entrepreneurs last week.

“That means that a change of 10 rubles in the exchange rate is equal to more than 3 trillion rubles [in losses]† That’s quite a volume,” the RBC business daily quoted Siluanov as saying.

In addition to increasing revenues, the government also apparently hopes that a weaker ruble will encourage manufacturers to produce substitutes for imported goods that are no longer available due to Western sanctions and the exit of Western companies from the Russian market.

“If the currency is strong – at least on paper – it means that imports are cheap. To increase domestic production, [the government] would rather have a weak ruble,” Trickett said.

But economists are divided on whether the ruble will continue to fall — the direction the government is apparently taking.

“I see it sinking back into a range more like what it was before the invasion or maybe a little higher, between the mid 70’s to the low 80’s [against the U.S. dollar]’ said Trickett.