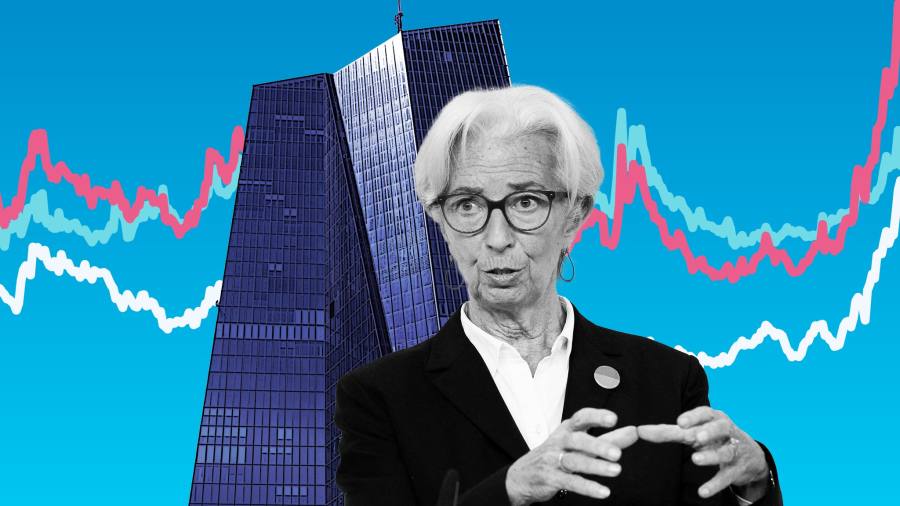 The 25 eurozone rate-setters meeting in Amsterdam last month thought they had enough time to finalize the European Central Bank’s plan to avoid a bond market crisis as they started raising interest rates. They were wrong.

A rise in borrowing costs for weaker southern European countries, notably Italy, led to a divergence in yields with northern member states – a phenomenon that central bankers describe as “fragmentation”. In an emergency meeting, the ECB decided to “accelerate the completion of the design of a new anti-fragmentation instrument” to counter an unwarranted sell-off of a country’s bonds.

“If the fragmentation in the bond markets is unjustified, we need to be as unrestricted as possible,” Pierre Wunsch, head of the Belgian central bank and board member of the ECB, told the Financial Times. “The rationale for acting is strong when we are faced with unwarranted fragmentation.”

The ECB’s Governing Council is expected to discuss the plan at a meeting in Frankfurt this week and provide more details at its next meeting on July 21, when it plans to raise its deposit rate for the first time in more than a decade. But it will get a lot of attention about how the system will function, investors and analysts warn.

Why is the ECB doing this?

Like most major central banks – with the exception of the Bank of Japan – the ECB has stopped buying more bonds and plans to raise interest rates as it seeks to push inflation back from its highest point in decades. by increasing borrowing costs and thereby cooling demand.

But the ECB is dealing with the fact that the 19 countries sharing the euro still have separate fiscal policies, meaning they could experience a growing divergence in their borrowing costs, especially as rising interest rates fuel fears about high debt levels.

This is well below the level reached during the sovereign debt crisis of 2012, when Italy paid nearly 5 percentage points more than Germany for long-term bonds. But with Italy’s debt still higher than it was during the latest crisis, officials worry the country could be trapped in an unsustainable spiral of rising debt burdens.

The ECB believes that a new instrument will help ensure that its monetary policy is spread evenly across the bloc. “We have to keep the transmission channels open so we can’t have fragmentation,” said Mário Centeno, head of Portugal’s central bank and a councilor of the ECB. “We need a backstop.”

The ECB said: “Talks are ongoing and no decision has been taken yet.”

How will it work?

The ECB is expected to commit to buying bonds from countries that it believes will increase borrowing costs as a result of market speculation to levels beyond economic fundamentals warrant.

Unlike the previous schemes, where bonds from all countries were bought in proportion to their size, the new plan would target only those countries most in need of support. The ECB can offset the inflationary effect of any bond purchases by collecting the same amount of deposits from banks.

The hardest part will be deciding when to intervene. “The difficulty will be about the gray zone between what is justified and what is not and that is the area of ​​moral hazard we need to navigate,” Wunsch said.

Silvia Ardagna, an economist at Barclays, said it would be “complicated” to design the new tool, adding: “We do not expect the ECB to reveal specific details about the level of yields, spreads and their respective rate of change that would define an orderly versus a disorderly regime.”

As of this month, the ECB has been able to flexibly reinvest the proceeds of maturing bonds into a €1.7 trillion portfolio it already owns, allowing it to use German maturities to buy more Italian debt, for example. But most analysts believe that such reinvestments will not be enough.

What guarantees will there be?

This means that countries will probably have to meet certain fiscal conditions before the ECB can buy more of their debt. Some preconditions may already be in place, such as the structural reforms countries have agreed to in return for their share of the €800 billion EU coronavirus recovery fund. They could also be linked to the EU’s fiscal rules, even though they have been suspended until the end of 2023.

The ECB is likely to ask the European Commission to monitor any conditions associated with the new instrument. “Otherwise, the central bank will drive governments towards fiscal policy, which is not what it wants,” said Carsten Brzeski, head of macro research at ING.

The ECB is also considering an additional requirement for countries to commit to a medium-term fiscal sustainability plan, officials said. This could be part of the committee’s annual oversight of national budget plans. “We need countries to make an effort and come up with a credible fiscal plan,” Wunsch said.

The potential liabilities are likely to be less onerous than those for the ECB’s Outright Monetary Transactions, a previous bond-buying program that required a rescue package from the European Stability Mechanism, along with rigorous reform requirements. The OMT has never been used and the involvement of the ESM is seen as politically toxic in southern EU countries, especially Italy.

Will the plan be legally and politically contested?

Yes, probably both. There has been a cautious response from the German and Dutch finance ministers, who insist that the ECB should not encourage member states into fiscal sluggishness or stray away from “monetary financing” of governments, in violation of the EU treaty.

The ECB’s previous government bond purchases have been repeatedly challenged in the German constitutional court and most analysts expect similar steps against its latest plan.

Joachim Nagel, the boss of the German central bank, this week outlined several restrictions he expected to impose on the anti-fragmentation regime, which he says “can only be justified in exceptional circumstances and under narrowly defined conditions”.

Economists worry that the ECB will eventually be bound by so many circumstances that it will not have the firepower needed to keep the markets in check.

“If they do things half way and don’t live up to expectations, they will have to do more later on, as so often happens in the euro area,” said Frederik Ducrozet, head of macroeconomic research at Pictet Wealth Management.