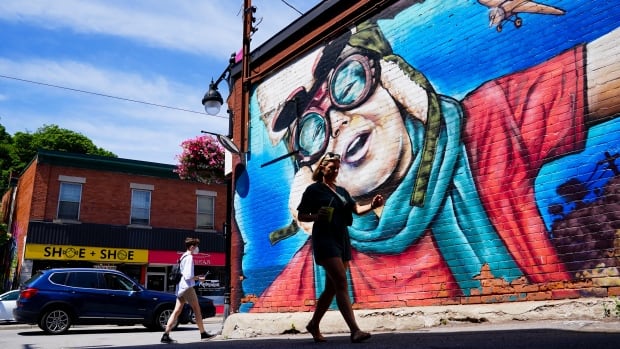 Unemployment in Canada has never been this low. Employers are adding jobs and taking on what few workers have yet swallowed. Canada’s GDP growth is also better than any other G7 country.

Yet the economic story in this country is dominated by doom and gloom.

In fact, Google Trends results show that searches for the word “recession” in Canada have risen dramatically, even as the economy continues to grow.

“I think it’s a bit of an exaggeration,” said Pedro Antunes, chief economist at the Conference Board of Canada. “I think the bad news is clearly getting more attention in the discussion out there.”

But, he says, the economy is doing really well.

In fact, the Canadian economy benefits from some of the things that worry consumers, even if it squeezes your wallet.

High global oil prices increase your costs at the pump, but it acts as a boost to Canadian GDP. Sky-high food prices mean you’ll pay significantly more at the grocery store, but they’ll boost revenues for Canada’s vast agricultural industry.

The Domino Effect of Consumer Confidence

Consider this series of events: Consumers worry about a potential recession. They scale back on their purchases. They decide to save some money instead of buying that new device. Or car. Or jacket.

If you extend that over the Canadian population, those concerns about a downturn could actually cause the economy to slow down even faster.

Just last month, Bank of Canada Governor Tiff Macklem emphasized his concern that the erosion of consumer confidence could cause real harm.

“If the economy slowed sharply and unemployment rose significantly, the combination of more highly indebted Canadians and high house prices could amplify the downturn,” he said.

So the Bank of Canada is just as concerned as you are, but it also has a lot more data than we do.

This week, the central bank released two major surveys looking at the confidence level of Canadian businesses and Canadian consumers.

Both reports highlighted the negative impact of inflation and concerns that high prices will persist for a long time to come.

But the Business Outlook Survey also highlighted the resilience of consumer demand at the moment.

“Backed by strong demand, many companies are planning to increase capital expenditures and add staff,” the bank wrote as part of the survey’s overview.

In other words, even with inflation problems, many Canadian companies believe consumer demand will remain strong enough to justify new investment and new employees.

But that’s not because companies need fewer employees.

“We expect employment growth in Canada to slow to 15,000 in June — driven by a dwindling supply of workers rather than a lack of demand,” RBC economist Nathan Janzen wrote in a report released earlier this week.

“The number of vacancies has decreased slightly, but is still almost 70 percent above pre-pandemic levels.”

So more Canadians are employed than ever before, their wages are rising (though not as fast as inflation), and the economy continues to grow.

Should we then shake off our worries about where we are going? Absolutely not.

“We are increasingly concerned that a combination of headwinds, along with [debt] imbalances in the household sector could push the Canadian economy into recession,” Tony Stillo, a director at Oxford Economics, wrote in a research paper released Wednesday.

“We still consider a soft landing to be the most likely outcome for the economy, but we estimate that the probability of a recession in the next 12 months has risen to about 40 percent.”

Most forecasts still show that the Canadian economy will grow through 2022 and slow to near zero by the end of the year. It’s a precarious situation that comes after some of the most volatile years in decades.

The pandemic has exceeded all our expectations. Almost everyone assumed that an economic shock like the one we saw in the spring of 2020 would lead to a recession like we hadn’t seen since the Great Depression.

Is Canada headed for a recession?

Canadian Finance Minister Chrystia Freeland says a ‘soft landing’ is still possible for the Canadian economy as inflation rises and fears of a recession mount. Is the Bank of Canada raising interest rates the best way to fight inflation?

But households and businesses were propped up by an unprecedented wave of government support.

Experts then said the end of the pandemic would lead to a surge in spending unlike anything we’d seen since the Roaring ’20s.

Again, the forecast missed the mark as COVID-19 refused to abate and consumers stayed at home.

Given the uncertainty of the past 2½ years, who can blame households today for looking beyond all the good economic data and focusing on the negatives of what may come down the road.