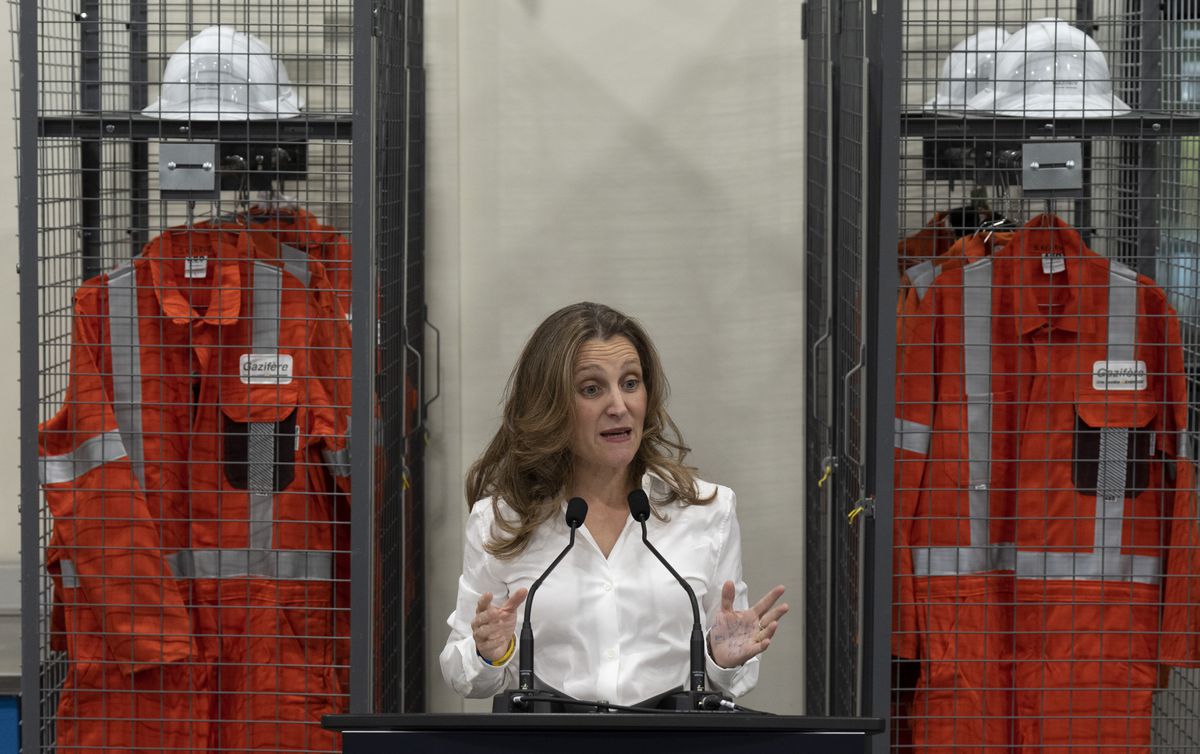 Deputy Prime Minister Chrystia Freeland says leading Western countries are setting an example by embracing friend-shoring or shifting trade to friendly partners and like-minded democracies: an approach that would curb some commercial relations with countries like Russia and China.

At a press conference in Gatineau on Monday, Ms Freeland noted that the European Union is proposing to ban imports of products made using forced labor in response to pressure from human rights activists concerned about modern slavery in China’s Xinjiang region.

She also noted that in August the US Congress passed legislation providing tax breaks for electric vehicles that would only apply if they are assembled in North America and the essential minerals in their batteries come from countries with which the US has a free trade agreement. That means automakers should end any reliance on Chinese sources for the battery materials.

When asked what ‘friend-shoring’, a contraction of ‘friend’ and ‘offshoring’, means for relations with non-democratic countries, Ms Freeland said: ‘I think it means you have to be careful. We have to be very careful not to be strategically vulnerable to authoritarian regimes.”

Going on, she said any trade dependence on Canada should be with a friendly partner, not an illiberal country. “We also need to be realistic and be sure that where our economies are vulnerable to decisions from another country, where we depend. In the first instance, we should strive to have that dependence on a fellow democracy.”

She said Brussels, with its proposed ban on slave labor imports, and Washington’s attempt to remove China from the electric vehicle supply chain are leading the way.

“From the two largest economic, democratic blocs in the world – the US and the EU – we are seeing clear steps in that direction,” she said.

The Deputy Prime Minister was asked what this means for Canada’s upcoming Indo-Pacific strategy, a blueprint for relations with Asia and India prepared by Foreign Minister Mélanie Joly, Ms. Freeland was wary.

“I’m not going to steal her thunder. She will have a lot more to say about the Indo-Pacific strategy in the coming weeks.”

However, Ms Freeland already outlined an assertive approach to China in a speech she gave to the Brookings Institution in Washington last week, in which she also said Canada should embrace friend-shoring. “We must design our government procurement and incentive programs with the gift of friends in mind.”

There, she said Canada should stand up for fellow democracies that are being bullied, and named three countries that were mistreated by China after they attacked Beijing.

“We must then be prepared to spend some domestic political capital in the name of economic security for our democratic partners,” Ms Freeland said.

“We cannot allow Lithuania to be forced to implement its policies towards Taiwan, or South Korean companies to be harassed and boycotted in retaliation for legitimate national security decisions taken by Seoul,” she said. “A commitment to support each other in the face of such economically strong armaments is the best way to ensure it doesn’t happen again.”

Russia has used energy as a weapon in recent years.

“It’s not just Russia,” Ms Freeland said in her Brookings speech. “China is also adept and deliberate in using its economic ties to us as leverage to achieve its geopolitical goals. Norway learned this in 2010, when the Nobel Prize was awarded to: [human rights activist] Liu Xiaobo and Norwegian exports of fish to China were halted as a punishment,” said Ms Freeland.

David Parkinson: Chrystia Freeland has set out a bold vision for a new global economic path, but it won’t be easy

Similarly, “much of Australia’s trade with China was frozen in 2020 when Canberra called for an independent investigation into the origins of COVID-19.”

Canada itself came under pressure from China after it arrested a Chinese tech executive at the request of the United States.

“Canadian pork and canola exports were banned — as two Canadian citizens were wrongfully imprisoned — when Canada honored its extradition treaty with the US and detained Huawei’s chief financial officer.”

Ms Freeland said that despite the need to reduce reliance on authoritarian countries, there will still be a need to work with them to fight climate change, tackle global health problems and address imbalances in the global financial system.

Akshay Singh, a research associate at the University of Ottawa’s Center for International Policy Studies, said it is noteworthy that Ms. Freeland’s Oct. 11 speech specifically highlights China’s coercive behavior and how this behavior has expanded.

He said her speech indicates Canada is increasingly interested in building closer ties with other democracies in the Indo-Pacific region, such as Japan and South Korea, to offset the chances of future trade disruptions.

Singh said “friend-shoring” will not end China’s role as a Canadian trading partner, nor affect its status as a major global economic player. But, he said, shifting crucial supply chains to friendly countries would protect Canada from any coercion from Beijing, and this along with a network of democracies would frustrate efforts to pressure Canadians.

“A group of like-minded countries that can withstand future economic coercion is very likely to be of great concern to the Politburo,” said Mr Singh, referring to the Chinese leadership.

US Treasury Secretary Janet Yellen has popularized friend-shoring. In a speech in South Korea in July 2022, she mentioned the need to reduce reliance on China for essential goods or goods.

“We cannot allow countries like China to use their market position in key commodities, technologies or products to disrupt our economies and exert unwanted geopolitical influence,” Ms Yellen said in July.