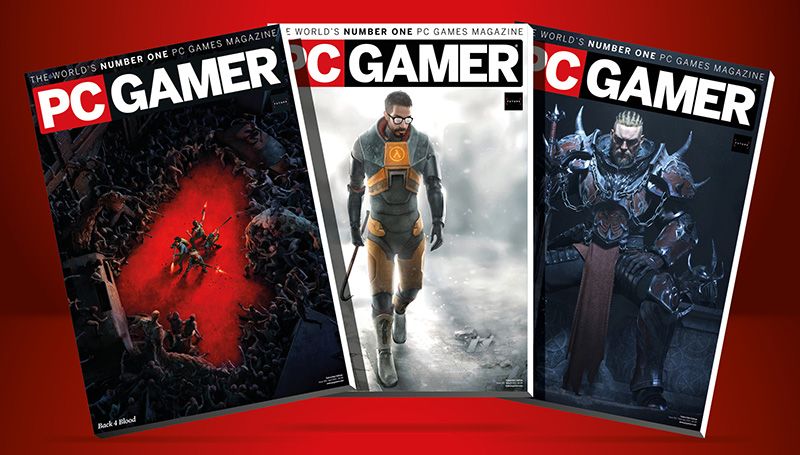 Our community manager, Stevie Ward, went through her collection of PC Gamer’s print edition and asked what everyone thought was the magazine’s greatest cover of all time. “I have to say it’s basically games I don’t play,” Stevie said. She conveniently linked to a gallery of recent issues (opens in new tab)and you can also look at our dear subscriber covers on Twitter (opens in new tab)presenting a guff-less version of the magazine, light on text.

What is your favorite PC Gamer magazine cover?

Here are our answers, plus some from our forum.

Evan Lahti, Global Editor-in-Chief: I don’t have much affection for Duke, but the “Come Get Some!” The November ’97 issue is the number I most associate with my time as a PC Gamer reader, though it featured an infamous game: Duke Nukem Forever. I love the smashing feature opener in the image below. I still remember individual box-outs and advertisements from this issue, such as the absurdly heavy text “The way to a man’s heart is through his sternum (opens in new tab)ad for Half-Life that has absolutely nothing to do with the game.

This was a moment in PC Gamer history when our page count was at its peak (in this case, a brick-like 448 pages), and the issue remains a time capsule of an interesting moment in PC gaming history – post-Doom, post-Quake, but pre-EverQuest and Unreal Tournament, a moment when everyone was excited about the possibilities of online gaming, but also a time when that imagination surpassed playability.

Robin Valentine, editor: I’m not just going to pick one of my own covers, I’m going to cheat and pick a split run. We put together the song ‘Escape Your World’ at a point where the lockdown was really making us all depressed. I wanted to create an issue that reflected that feeling, but in a positive way – at a time when you couldn’t explore the real world or travel, we embraced the escapism inherent in games.

It took a lot of effort to find a way to visualize that. Usually we always tried to avoid a design that didn’t have a strong central character, but in this case I really wanted the landscape itself to be the focus – glorious digital horizons stretching out in front of you. And to make our lives as hard as possible, we also decided that it should be a split run, showing these four different worlds.

Big credit to my art editor John Strike for his design work on these – seeing them again makes them feel like a bit of a magic trick to me. It’s wonderful to be able to look back on something from that pretty miserable point of the pandemic and be proud of what we made happen.

If the rest of you don’t pick songs that I edited too, I’ll never talk to you again.

Jacob Ridley, senior hardware editor: Browsing back through the library of past PC Gamer covers brings back so many memories of reading game magazines in the schoolyard when I was a little kid, thinking that one day I’d be so lucky to play games for work. .

That said, I actually have to pick the December 2020 issue (#350) as my favorite. That was my first cover story; I even have it on the wall in my house. I think younger me would be pretty proud of that.

Mollie Taylor, news writer: I have a bit of a soft spot for the May 2021 issue, because it’s the first issue where I get to write something! It also happens to be the issue with Genshin Impact on the cover, arguably one of the least PC Gamer covers I’ve ever seen. However, as a lover of anime and Genshin Impact it is is all of Mollie.

The team also always complains about Planet Zoo’s cover, which I’m sure will show up in someone’s answer. It’s very cool, another one that feels a little less on-brand. Any covers that undermine the stereotypical PC gaming aesthetic I’m here for.

Phil Savage, Editor-in-Chief, UK: Issue 310 was my first full issue as a magazine editor — my first issue deciding which game would grace the cover. I wanted to use the magazine as a vehicle to celebrate the width of the PC as a platform, so I decided to take a chance. My first cover game was going to be a mod.

The thing with mods is that they don’t necessarily have slick concept art to use. Thankfully, Black Mesa was a remake of Half-Life, a game with the most recognizable iconography in PC gaming. John Strike, our art editor and secret hero of PC Gamer magazine, created the beautifully textured background and we spent a little extra to pay for a fluorescent Pantone for the lambda symbol. As good as it looks on screen, the physical copy is so much more vibrant.

We’ve paired the Black Mesa feature with a large, multi-part retrospective on Half-Life 2 – honoring the song’s release on Episode 2’s 10th anniversary. The whole thing came together brilliantly, both artistically and artistically. as conceptual. It remains one of the best issues I’ve worked on.

Ted Litchfield, co-editor: I’ll have to go with the Game Gods, November 2000, although maybe not for the cover itself, but what it is represents. I was about five years old when this song came out, and I’m not sure if it ever got into my hands through my older brother. It pops up here and there on Twitter and I always have to smile when I see it.

This is such a gorgeous slice of millennial fun, from the outfits on display to the titular “Game Gods” itself and the projects they’ve worked on. Alice, Daikatana, Sigma and Unreal Tournament are such a perfect sample of gaming 22 years ago, not necessarily in terms of quality in Daikatana’s case, but it certainly brings the feeling. The cover as a whole represents a time in PC gaming that I never really experienced for myself, but largely defines my taste to this day.

Morgan Park, staff writer: I wasn’t much of a magazine reader growing up, but I knew I would find a winner if I started looking for magazines older than me. My vote is March 1995, number 16.

It’s hard to beat a cover that enthusiastically tells readers, “GET HIGH!” before introducing a flight sim review. The red area against the blue sea is striking, almost distracting from the awkward “It’s showtime” text above a waving American flag. Not to mention the stunner of a demo disc recorded here: an early bit of Full Throttle and Mortal Kombat 2? sick.

Andy Chalk, NA News Leader: I have to go with issue 186 of PC Gamer’s US edition, April 2009, featuring FEAR 2: Project Origin, and more to the point a large, stark image of an oddly attractive (and completely undressed) Alma. This is not at all what you would call an accurate portrayal of the character, and yet someone decided that you should take this insane, murderous, absolutely terrifying woman – an epitome of supernatural horror really – and call her her. Really is called. And also naked. And then use lines like “Alma wants you (to die)” and “All will be revealed in our final verdict!”

I mean, what were they thinking here? FEAR 2 is a very different kind of shooter than its predecessor (and not nearly in the same league), but there’s absolutely nothing about it that makes me think, “Yeah honey, it’s sexy alma time!“It’s such a bizarre choice, I can’t help but find it intriguing. Or maybe baffling is a better word for it. Anyway, that’s one hell of a cover.

Oh, and by the way, Metacritic says we “exposed” FEAR 2 as a 72% shooter: “FEAR 2 fails to innovate, which would only make it a respectable but forgettable shooter if not for some good fears.” I’d say that’s pretty accurate.

Stevie Ward, Community Manager: It’s amazing how the covers really capture a time in the gaming… when I go back to the archive and I can really feel what it felt like at times, some of them just trigger a lot of memories of events and releases around that time .

It’s like… old family photos, but for gamers… does that make sense?

I’m biased too, but since I was the community manager before this, I always get the feeling:

main dish: I envy you that you still have room to keep your PCG Magazine collection. Back in the ’90s, I kept all my monthly copies (and they had many more pages back), as well as those from Computer Gaming World & Computer Games & Strategy Plus. But eventually I ran out of space to store them, sometime in the middle of 2010 (I think). So I took them all to my local Salvation Army store (they actually took them back then). I wish I still had them.

I can’t remember any of the images but the one in your link (opens in new tab), it should be the June 2011 issue, with Commander Shepard on the cover of Mass Effect 3. I’ve spent literally hundreds of hours in the ME games over the years and I was so excited about ME3. There were a lot of PCG articles after that because of the controversial ending, but it was still a great game.

frinds: I sealed some of the prints with water and kept them in a safe location to use a little James Pond lingo. Diablo 2, Quake and System Shock 2 are some of my favorite editions. Why? Well, not just because of the games, but because they were some of the magazines I always read when I took the train from my hometown to Norway’s capital: Oslo. The drive took about two hours, so I had just enough time to read through the entire magazine, not to mention the round-trip ticket to get excited about playing the demo discs.

Volleyball: It was the June 1996 Cover that got me my first PC gaming magazine purchase, still my favorite.

mknott: This is literally the same or at least very similar to the one I was thinking of, I used to play so much X-Wing vs. TIE Fighter and played Jedi Knight multiplayer in 2022 a few weeks ago.

Brian Boru: The most iconic of these is undoubtedly 2011-09.

The rest is largely forgettable in a multitude of similar covers on newsagents’ magazine racks. I assume there’s a ton of sales data to cram as much “content” as possible on a cover because that seems like the overwhelming design choice for magazines of all kinds.

the media man: As a 90s gamer, I’m a proponent of the early issues.