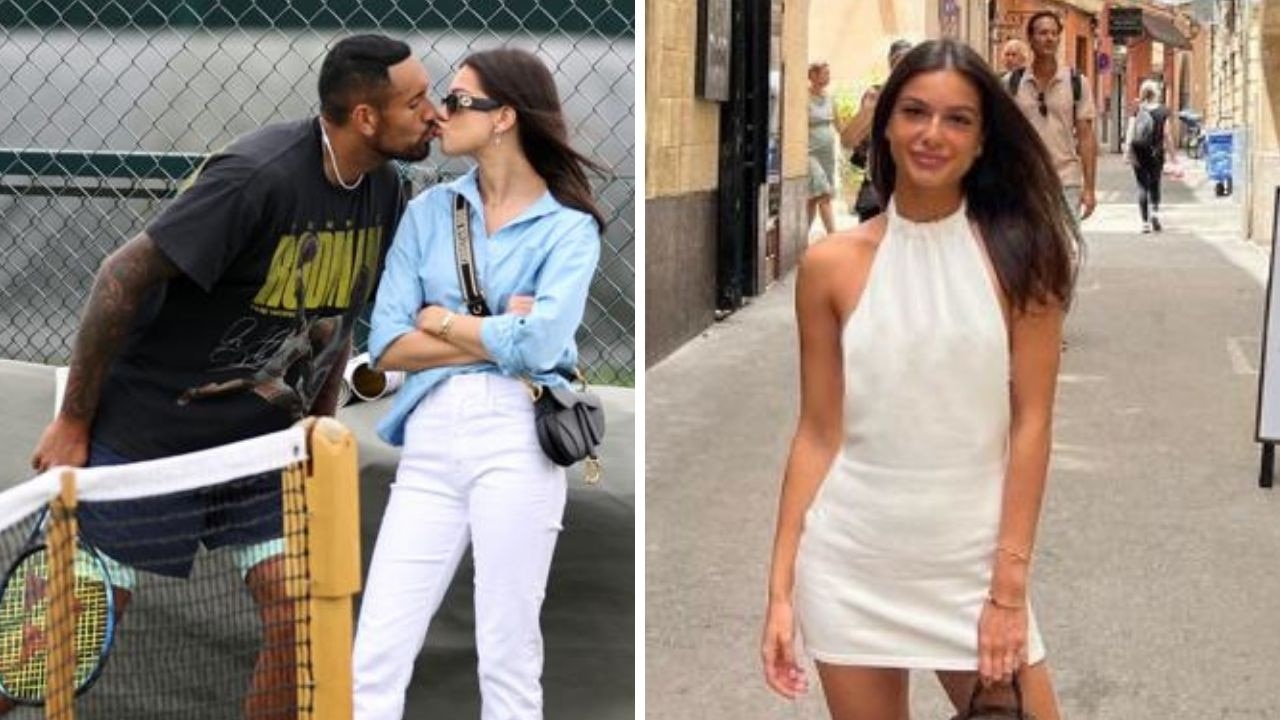 Nick Kyrgios’ girlfriend Costeen Hatzi has posted a statement of support after the Australian advanced to the Wimbledon final.

Nick Kyrgios’ girlfriend Costeen Hatzi has shared a heartwarming message of support following news that the Australian had advanced to the Wimbledon final.

Rafael Nadal withdrew from the semi-final against Kyrgios on Friday due to a abdominal injury, taking the Aussie star straight to the Wimbledon men’s final on Sunday.

The 27-year-old will play the winner of the other semi-final between Novak Djokovic and Cameron Norrie.

Kyrgios is the first Australian man to reach the Wimbledon singles final since Mark Philippoussis in 2003.

Hatzi, who has boxed all of his All England Club appearances with Kyrgios, paid tribute to her partner for making his first grand slam final.

Wimbledon final. This is insane,” Hatzi wrote on an Instagram story alongside a photo of her and Kyrgios sharing a kiss.

“I love you and we all can’t wait to see you there with all our support.

“When you have the right people around you, anything is possible.”

Kyrgios re-shared Hatzi’s story on his own social media profile, adding: “My baby, what a ride it’s been. Why not another? I love you.”

After his fourth round win against Brandon Nakashima, Kyrgios described Hatzi as “the best friend in the world” while praising his team.

“I have an incredible support crew,” said Kyrgios.

“My physio is one of my best friends. My best friend is my agent. I have the best girlfriend in the world. I just have so many people around me, they just support me.

“I feel like I can think about all those dark times when I pushed them all away.

“To sit here now, Wimbledon quarter-finals, to feel good, to feel composed, to feel mature, to have that around me, I’m immensely blessed. I feel like I’m just comfortable in my own skin.”

Kyrgios said Hatzi was the perfect travel partner as she helped drop him off after big matches.

“In the past, when I’d come this far in a grand slam – or I’ve played big games – I couldn’t part… I was often on my phone after these kinds of games,” he said. †

“When you get a result like that, it’s so easy to get attached to technology – everyone’s opinion of the game or seeing highlights, that sort of thing.

“But I feel like I can really get rid of that. And that’s a big part of my growth. Of course it helps to be obsessed with my girlfriend, but I can just let that go and enjoy my dinner and wake up the next day and separate tennis and life.”

Kyrgios has hinted several times about his plans to one day marry Hatzi.

The Australian tennis star and Instagram influencer wagged his tail earlier this year after seeing Hatzi with a diamond ring on her engagement finger.

Kyrgios also used a diamond ring emoji when thanking Hatzi in an Instagram post. The Canberran then told his followers that the wedding will take place “very soon”.

Kyrgios responded to a photo Hatzi posted by writing, “Can’t wait to live with you” and he also has Hatzi’s first name tattooed in black flowing cursive script on his left leg.

He clearly likes the way things are going with the Sydney-based influencer right now.

“Relationships are easy when both people are invested,” he told Zodiac sign earlier this year.

“It is difficult to move a sofa on your own. I’ve had a few relationships in the past that are brutal when you’re gone that long. It does affect you when you’re on the field.

“The luxury I have now in my career is that I can take care of the person and if they want to travel with me, they can.

“I am in a very blessed situation that not many people are capable of. Hopefully everything will be fine, but I’m not planning anything more.”